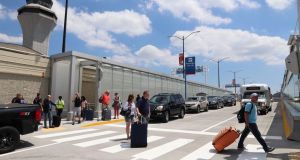 St Louis Lambert International Airport in Missouri: DAA International is one of 18 bidders for the project to operate the facility on a long-term lease

The international arm of Dublin Airport operator DAA has made the long-list of bidders to run the St Louis Lambert International Airport in Missouri.

DAA International is one of 18 bidders for the project to operate the facility on a long-term lease. The city of St Louis is the facility’s ultimate owner.

The airport last year welcomed 15.6 million passengers with total traffic increasing 6 per cent. Budget carrier Southwest Airlines is the largest airline at Lambert, carrying 60 per cent of the airport’s total passengers last year. American Airlines and Delta Airlines are the second and third biggest carriers at the facility by passenger numbers.

While DAA is competing to secure the contract, it is currently in talks with several potential financial investors to partner them in doing so, according to DAA International chief executive Nick Cole.

“This is a very exciting opportunity for DAA International as it is a major new market in terms of airport management contracts,” Mr Cole said.

DAA faces tough competition, including a Canadian pension fund and other airport operators, including Aena International, a Spanish company whose parent operates 46 airports in Spain. Other competitors include Corporacion America Airports, the largest private sector airport concession operator in the world, and Royal Schiphol Group which operates Amsterdam Schiphol Airport among others that collectively handle more than 79 million passengers annually.

DAA International is a subsidiary of DAA which provides management services and advice to clients. It has a management contract for the operation of terminal five at King Khalid International Airport in Riyadh, Saudi Arabia. That facility welcomed 14.7 million passengers last year.

In the Philippines, the company is advising Aboitiz InfraCapital, which has signed an agreement to upgrade, expand and operate two regional airports in the country.

DAA Group is also active internationally, in addition to its operation of Dublin and Cork airports. The company has business in Canada, Cyprus, Germany, India and New Zealand. It owns a 20 per cent stake in Düsseldorf Airport and an 11 per cent stake in Hermes, a consortium operation two airports in Cyprus.

The city of St Louis set about privatising the operation of its airport in 2017. It has since engaged in detailed communications with residents, travellers and employees to establish whether the move would improve the facility. According to the airport’s annual report for 2018, revenues fell 4.1 per cent to $134 million, (€121 million) while its operating loss deepened to $7.6 million (€6.9 million) from $1.3 million (€1.1 million) the previous year.