Brexit Proof: ‘Nobody has voted for what is going on at the minute’ 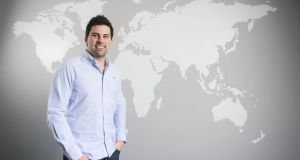 Paul Stewart: ‘The backstop is the biggest thing for us to provide some form of comfort’

I was surprised. I didn’t think it would happen. It was a big shock, especially being from Northern Ireland, I thought people would want to stay in the EU.

We operate worldwide. About 60 per cent of our business is in the EU. The other 40 per cent is international. We deal with customs all the time. We know how complex it can be. When we ship in Europe, all we have to do is put a label and it goes within a few days. If we ship anywhere outside the EU, we have to create a pro forma invoice or a commercial invoice which has to list every item we are sending, along with its value and where it was made.

Then there is a personal effects declaration to be able to clear it. That is just the start of the paperwork. And that is just the US, who actually make it easy. You can imagine what it would be like if you had to do a different set for all countries. The paperwork would be insane.

The trade we do with the South is about 10 per cent of our business so it doesn’t make a huge amount but it will definitely impact us.

When did you begin preparing for Brexit and what contingency plans have you?

We have been working to reduce the percentage of our work in Europe.

We have been increasing our business in the USA and Australia. We are focusing on growing it.

We have been working on the USA and Australia for about two and a half years. That was something we were going to do anyway but Brexit brought it up by two years. It made us think we may as well spend our money in a market we were certain of. We may as well focus on those instead of European countries where we don’t know what is going to happen.

Not really. There is almost no positives. An advantage could be VAT exemption on shipping charges.

However, the cost savings would be ruled out by the extra paperwork that would be required.

Every day it changes. We think we are quite ready and some of the partners we work with, too. It changes every week. We are as ready as it can be. If it happens tomorrow, we will still be unprepared, I would say.

The very best case would be to stay in the EU. After that, as long as a free trade agreement stays in place, it doesn’t really matter to me what happens. But that is a pretty big part of being in the EU so I don’t know how they could negotiate that. The worst case is leave with no deal. That would put my business into turmoil.

How might the Irish or British governments, or the EU help ease the pain of Brexit?

How do you think the Irish/British (or both) governments have handled the Brexit negotiations?

The Irish government has done pretty well so far. For the British government, it has turned into a political game. It has come down to the parties and what they can get out of it rather than what is best for the people.

If Brexit does go ahead, I think it will be a bleak outlook for the growth of our business in Europe. A worse situation. If it doesn’t happen, I think we will continue to grow and be in a better position.

Yes, personally and on a business level. It wasn’t clear what people were voting for. Nobody has voted for what is going on at the minute, nothing is really benefiting any side of the debate, leave or remain.