Emirates grows passenger numbers by 9% on Dublin to Dubai route

Up to 1,440 passengers fly between here and Dubai on daily basis 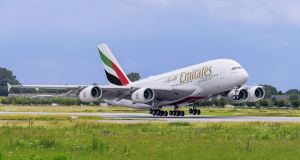 Emirates carried 29.6 million passengers in the six months to the end of September.

Emirates has grown its passenger numbers between Dublin and Dubai by more than 9 per cent so far this year, with customers using the hub to fly on to other destinations.

While the airline ultimately owned by the government of Dubai’s investment vehicle didn’t disclose the total volume of passengers it carried, it noted that up to 1,440 passengers fly daily to and from Dublin and Dubai.

For the Rugby World Cup, Emirates carried more than 3,000 rugby fans to Japan, although Perth, Sydney, Bangkok and Auckland are the most popular destinations on the company’s network.

Singapore and Bangkok are the busiest routes destinations for business and first-class travel, while passenger numbers going to the Maldives are up 23 per cent on last year.

The company also transports cargo on the Dublin to Dubai route and carries food items such as crabs, oysters, razor shells and salmon, much of which is bound for Hong Kong, Shanghai and Singapore.

At a group level, Emirates said on Thursday that profit nearly quadrupled in the first half of the year to 862 million dirhams (€212 million).

Emirates carried 29.6 million passengers in the six months to September 30th, a 2 per cent decline after it reduced the number of seats it offered by 5 per cent, in part due to a 45-day closure of a runway at its Dubai hub. The amount of cargo it carried declined 8 per cent to 1.2 million tonnes. – Additional reporting: Reuters