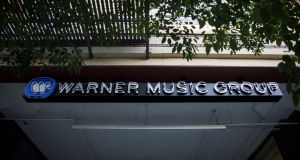 The Warner Music sale priced towards the higher end of the range announced last week and was upsized by 10 per cent. Photograph: Bloomberg

Warner Music owner Len Blavatnik has cashed in part of his investment in the music industry with the $1.9 billion (€1.7 billion) sale of shares on Wednesday, in the biggest US initial public offering of the year.

After delaying pricing its flotation to show solidarity with the Black Lives Matter movement, the company that represents artists including Cardi B and Meek Mill sold 77 million shares at $25 a share, valuing the group at $12.8 billion.

The listing breaks a lull in big deals this year that has dragged the sum raised in US flotations to two-thirds below the amount raised for the same period last year, according to Refinitiv data.

The Warner Music sale priced towards the higher end of the range announced last week and was upsized by 10 per cent, an indication of strong investor demand.

The proceeds will not go to Warner itself but to the investment vehicle of the Ukrainian-born Mr Blavatnik, a citizen of the UK and the US who bought Warner Music for $3.3 billion in 2011, when the music industry was in the doldrums and Spotify had yet to catch on widely in the US.

The sale represents the biggest test for the music business since Spotify’s listing two years ago and will be closely watched as a barometer for how far the industry has come from the dark days of piracy.

Warner had initially filed to list in February but when the pandemic began to grip the US and Europe the company put the plan on ice. However, in the ensuing weeks, the company’s executives saw that demand for streaming entertainment was rising as people were stuck at home. – Copyright The Financial Times Limited 2020

1 Columbia Sportswear defies gloom with first Irish standalone shop
2 Nine more suing INM and Leslie Buckley over alleged data hacking
3 Why are markets booming when a crash is on the way?
4 Restaurants file court actions against insurers over lockdown losses
5 Stocktake: Playing poker with the day traders
6 How to further divide the economy using the wage subsidy
7 How much do Irish people earn? And what will Covid-19 do to our wages?
8 Rosslare Europort in line for €30m upgrade from Irish Rail
9 ‘The rental situation stops me moving back home’
10 Brexit: System agreed for Irish goods to skip checks on UK trade
Real news has value SUBSCRIBE