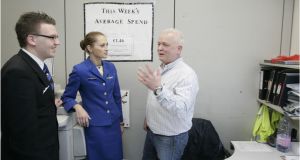 Ryanair is on the hook for €1 billion of passenger refunds, according to both the Sunday Independent and the Business Post. Ryanair executive Eddie Wilson has insisted the airline’s plan to run 40 per cent of its schedule from July 1st was realistic and would be reflected in its Irish operation. He said 25 million passengers already entitled to a refund would receive either money or vouchers.

A third of Irish mortgage brokers are aware of cases where mortgage applicants who have signed contracts to buy a new home are at risk of losing their deposit for reasons linked to Covid-19, according to new research quoted in the Sunday Independent.

A survey by Brokers Ireland found that of those who were aware of this possibility, more than 40per cent of brokers believed this was extremely common or fairly common.

The Government is under mounting pressure to follow the lead of other European countries and provide a low-cost backstop for up to €15 billion of trade credit that is under threat in the Covid-19 crisis, the Sunday Times reports.

More than 1,000 Irish companies use trade credit insurance to mitigate the risk of not being paid by Irish and international customers. The amount of trade insured by three credit insurers active in the Irish market – Atradius, Coface and Euler Hermes – amounts to more than €50 billion a year, the paper says.

AerCap has a 15.9 per cent stake after it converted the airline’s lease obligations into shares. Dublin-based lessor Avolon, headed by Dómhnal Slattery, owns a further 5.5 per cent, while DP Aircraft Ireland has control of just over 5 per cent.

RTÉ made an offer of €12 million for a stake in Maximum Media before the company‘s current difficulties, the Business Post reported. The public service broadcaster made the indicative offer of €10-€12 million for 49 per cent of the Irish publisher in 2018.

Insurance Ireland accepted in a private meeting with Minister for Finance Paschal Donohoe that some business policyholders had a “strong case” for their claims to be paid out, the Business Post says.

The details are contained in documents released under Freedom of Information legislation, which also show that, at an earlier meeting, Donohoe and his officials singled out FBD and described its position on business interruption claims as “very questionable”.