Existing TV customers will get free access to new channel, which has Champions League 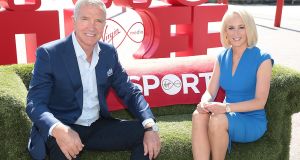 Graeme Souness and Sinéad Kissane pictured at a recent event to announce the rebrand of TV3 to Virgin Media. Photograph: Brian McEvoy

Non-Virgin Media customers will also have to pay up to €20 a month to access the sports channel, which will show the 300-plus Champions League and Europa League games that will not be available free to air.

This is all part of Virgin Media’s strategy to boost its television subscriber base and pinch customers from rivals Sky, Eir and Vodafone.

According to its latest filings, Virgin Media had 273,800 TV subscribers in the State at the end of March, thought to be about half the number of Sky, which does not publish subscriber data for the Irish market.

Virgin Media’s network is currently available to just under 900,000 homes here, about half of the country’s housing stock.

In May, Virgin Media announced it had won the rights to show 327 Uefa club football games in Ireland exclusively for the next three seasons. It has since announced plans to rebrand TV3 and its sister stations under the Virgin Media name, along with the launch of its sports channel.

Non-Virgin Media customers will be able to access its TV app for €20 a month on a 30-day contract.

This is part of Virgin Media’s strategy to maximise the commercial return from its multi-million-euro purchase of rights to the two prime Uefa club competitions for the next three seasons.

Starting in September, Virgin Media 1 (the new name for TV3) will show a Champions League game each Tuesday night at 6pm. Rival broadcaster RTÉ, meanwhile, has acquired the rights for the 8pm kick off on the same night.

All of the other Champions League games on Tuesday and Wednesday nights will be available on Virgin Media Sports.

The good news for football fans is that the semi-finals and finals of both the Champions League and the Europa League will be broadcast free to air by Virgin Media.

Paul Farrell, vice-president of commercial at Virgin Media, said the company was “excited” about the future of its new sports channel, which will have exclusive access to more than 450 top-level Uefa club matches along with a selection of other football tournaments.

“Our new, dedicated sports channel reinforces our view that we are Ireland’s leading connected entertainment provider, and what better way to show it than providing world-class football on a dedicated platform for customers?”

“Even those who aren’t customers will be able to watch all the action through our Virgin Media TV Anywhere App, so they can be sure they aren’t missing a single thing.”

Virgin Media has signed up former Liverpool and Scotland captain Graeme Souness to head up its panel of pundits.

Virgin Media also has the rights to the Six Nations rugby tournament, which was shown on TV3 this year for the first time. In addition, its portfolio includes horse racing and it has secured certain rights for the new Uefa Nations League tournament this year.