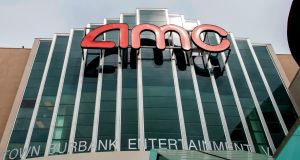 Universal Pictures’ deal with Odeon cinemas owner AMC will see big movies available for home audiences much sooner than they have been in the past. Photograph: Valerie Macon/AFP

The antagonist in this entertainment industry kerfuffle is – or was – Universal Pictures and NBCUniversal chief executive Jeff Shell. The party taking umbrage at its behaviour, and also, you know, those hurtful things Jeff said, was Odeon cinemas owner AMC, the largest cinema chain operator in the world.

But there has been a twist: Universal Pictures and AMC have kissed and made up offscreen, and it has fallen to Cineworld, the world’s second-largest cinema operator, to get the hump with its rival for failing to hold its previous line.

The beef concerned the system of theatrical windows that has typically given cinemas exclusivity over major Hollywood movie releases for three months (or closer to four in this part of the world) before they hit premium video-on-demand service.

These “windowing” practices have helped sustain cinema admissions and kept alive some that might otherwise have gone under.

And yet as part of a landmark pact between Universal and AMC, Universal is now free to make its films available to rent online 2½ weeks after they land in AMC cinemas. “The wrong move at the wrong time,” was Cineworld’s terse verdict.

Let’s take a moment to acknowledge the “huh” factor of a mid-pandemic row about how long cinemas should get to keep films to themselves. From the perspective of film lovers living in places with no open cinemas, this is like a row about how to divvy up a cake when there is not only no cake, but no eggs, sugar or flour either.

Cinemas are still struggling to reopen. Those that are open have, of necessity, a lot of empty seats. In Ireland, about half had made a comeback by July 24th, according to advertising sales house Wide Eye Media. But the notable absentees include the big international players: only a smattering of Odeons are in action again, while Dublin’s 17-screen Cineworld emailed customers last week to say it was “still not viable” to reopen and gave no date as to when it might.

Perhaps it is the worldwide suspension of normal trading since March that has given aggrieved players in various industries more headspace than they would usually have to unpick the balance of power in their business relationships. This might otherwise be known as picking fights, except these skirmishes have the hallmarks of survival negotiations too.

The long-bubbling tensions about the ever-shortening theatrical windows blew up spectacularly in April, when AMC declared it would no longer show Universal films after “unacceptable” comments from NBCUniversal’s Shell.

Boosted by the $100 million that animated musical Trolls World Tour had raked in from digital sales after its original spring cinema release was derailed, Shell had mused to the Wall Street Journal that, as soon as everything was open again, “we expect to release movies on both formats”.

Such two-timing was “disappointing” to AMC, which insisted it was left with no choice: its cinemas in the United States, Europe and the Middle East would not be playing any Universal movies when they reopened. Not even the ninth film in the Fast and Furious franchise would darken its swinging doors.

In a distinct change of tone last week, AMC “enthusiastically” embraced a new model in which the theatrical window for Universal’s films will be slashed from 90 to 17 days and AMC will receive an undisclosed share of Universal’s premium video-on-demand revenue – a sweetener that hints at how AMC feels the cinema business is going.

Premium video-on-demand will create “added potential for increased movie studio profitability”, AMC reasoned, which “should in turn lead to the green-lighting of more theatrical movies”.

Cineworld, spluttering out its high-margin popcorn, deemed the rationale for the deal “unclear”. It still intends to boycott Universal and any releases that “do not respect the established theatrical window” (Netflix’s awards bait, for example, has long been banished from its screens).

In Ireland, meanwhile, Trolls World Tour is now showing in the Omniplex, Movies@ and Arc cinemas.

What AMC, which counts Chinese conglomerate Dalian Wanda as its biggest shareholder, and Cineworld have in common is that they have spent much of 2020 teetering on the financial brink. New debt agreements have been struck to stave off possible bankruptcy, though the picture remains blurred, the future scrappy.

Virus flare-ups in the US have pushed studios to delay already delayed releases, with Mulan’s “unset” place on the Disney release calendar symbolising the current state of flux.

To cinemas, it will be small comfort that Disney has so far opted to “unschedule” this live action remake – a potential $1 billion earner at the box office – rather than take the drastic step of dispatching it straight to streamer Disney Plus.

Covid-19 has condemned to permanent closure cafes, restaurants, clubs and theatres that were, by many metrics, popular destinations. It will be a Hollywood miracle if all cinemas survive.

Arthouses and other modest, locally owned screens with ties to their national film industries can choose to wage campaigns for public subsidies, but the indebted multinational multiplexes, which have done so much since the 1980s to reverse the decline in admissions, may be searching for saviours too.