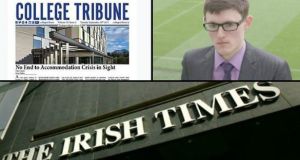 Jack Power, editor of UCD’s College Tribune which was awarded Newspaper of the Year at the 17th National Student Media Awards in a catagory sponsored by The Irish Times. Photographer Daire Hardesty

The College Tribune newspaper in UCD has been named newspaper of the year at the annual National Student Media Awards.

The publication, edited by Jack Power, is the last student newspaper in the Republic to be both editorially and financially independent. It is funded exclusively through advertising.

The winner of the award was selected by Irish Times news editor Mark Hennessy. The newspaper also sponsored the category. Power separately won the journalist of the year national press award.

Roisin Guyett-Nicholson and Martin Healey of the University Observer, which is also based in UCD, were jointly awarded the editor of the year award. The newspaper was also judged to have the website of the year.

UCD was the most successful university at this year’s awards, winning a total of eight categories including science education writer, sports writer, raidió trí ghaeilge, and the European Commission award.

UCC won five awards with Ryan O’Neill of Motley Magazine named journalist of the year. The college also scooped the magazine of the year, colour writer of the year, RSA award for journalism relating to road safety, and radio production – news & current affairs.

The Irish Times’ student hub award went to Gerard Ball of DCU for a piece on homophobia in the workplace.

The awards are organised by Oxygen.ie and have been running since 2000. Oxygen.ie manager Ciara Mahon said the standard was “absolutely incredible” this year.