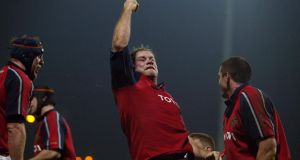 The ruling was made last week and comes on the back of loans drawn down from Bank of Ireland. Mr Sheahan had used the loans to buy property as part of his retirement planning during his rugby career. When property crashed, Mr Sheahan found himself able to pay the interest on the loans but not the principal.

The Independent also reports that IT services company Version 1 has raised €90 million in fresh capital to drive expansion in the UK and Europe. The money comes from Volpi Capital, a UK-based private-equity firm run by Irishman Crevan O’Grady.

According to the Sunday Business Post U2 guitarist Dave Evans, known as The Edge, has emerged as an investor in a Dublin-based start-up that wants to disrupt the ticket-booking industry. Mr Evans has joined a consortium of wealthy investors that includes businessman Barry O’Callaghan, music promoter Stuart Galbraith and investment firm Elkstone Capital in investing €2 million in the new company called Coras.

Irish-owned fintech company Fenergo has secured a Europe-wide contract with Spanish bank BBVA, as the Irish-owned company continues its international expansion, the Post reports. Under the terms of the deal, Fenergo’s software will be rolled out across BBVA’s European corporate and investment divisions.

The Sunday Times reports that the British insurer RSA has decided not to locate an EU base in Dublin, dealing a further blow to Ireland’s hope of reaping a Brexit dividend from companies seeking to protect their European passporting rights by relocating from the UK.

Dublin is believed to have been on the a shortlist of possible locations for RSA’s proposed EU office. It has now been dropped, however, in favour of Luxembourg or Copenhagen, according to industry sources.

Several members of the Ryan family of Ryanair fame are in line for a €42 million windfall following the winding-up of a company involved in their airline venture in Mexico, the Times says. A liquidator has been appointed to disburse the assets of Cogall, a Ryan-linked company previously known as Ryanmex Holdings. Cogall has assets of over €42 million and liabilities of €18, 450.

The Observer tells us that David Green, the director of the British Serious Fraud office has warned that businesses who do not co-operate with his agency will not be able to benefit from new settlement deals.

Aviva Irish general insurance chief executive sues employer 06:00
Transatlantic data transfers once again in the dock 06:00
‘It’s been quite easy’: Insights from the heart of the remote working revolution 05:37
Osmo is a home-school hero – an app that educates and distracts 05:06
Forme Life Studio: Mirror, mirror on the wall, who’s the fittest of them all? 05:05
Search executive
jobs on irishtimes.com