‘Peak TV’ shows no sign of abating just yet

Have you heard the one about the amazing new show you really can’t miss? 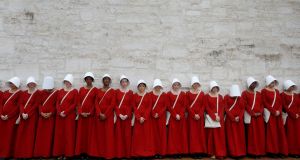 The headline “Man Not Accepting Any More Television Recommendations At This Time,” is a recent work of casual genius from satirists The Onion.

It “quoted” the man as follows: “While I am grateful for all of the input I have received in recent weeks, I must regretfully inform you that the window for offering new television programming suggestions for me to watch has officially closed.”

I can relate. But for all who do, perhaps it’s not a television recommendation moratorium that we need, but an actual pause on production itself.

It is almost two years since FX Networks chief executive John Landgraf posited that either 2015 or 2016 will “represent peak TV in America”, and that the volume of scripted television (drama and comedy) will then go into merciful decline.

The good/bad news is that there were a record 455 scripted shows on broadcast, cable and digital platforms in the US alone in 2016, and that there are no signs of this deluge easing up. Landgraf has since extended his estimated date for the end of “peak TV” to 2019, believing that the irrational exuberance of 2017 will likely spill over into 2018.

These are rough times for people with chronic cultural FOMO (fear of missing out). “Laura, we just added a TV programme you might like.” That’s nice to know, Netflix, can you add some hours to the day as well?

And they’re still at it, these pesky television producers. The industry is in Cannes this week, buying and selling and promoting their new babies at the television marketplace MIPTV. Among the dramas winning attention were gritty prison saga Jailers from Brazil’s Globo, priest-centric Danish drama Ride Upon The Storm (from the creator of Borgen), French science fiction series Missions, BBC Three university thriller Clique, and Sky’s first German-language drama Babylon Berlin.

Frankly, nothing would be easier than to fill out the rest of this column with an extensive, eclectic list of forthcoming “prestige” dramas and other “hot picks”. One that does deserve singling out, however, is the imminent adaptation of Margaret Atwood’s dystopian The Handmaid’s Tale, if only because US streaming platform Hulu deems it so critical to its commercial strategy that it spent the big bucks running a 30-second trailer during the Super Bowl.

Netflix’s golden purse didn’t create the global marketplace for television, but it has made it an altogether busier and more frantic environment. Its splurge on original content has obliged over-the-top rivals such as Hulu and Amazon to adopt copycat tactics, as well as forcing traditional broadcasters to up their game. It has also created more opportunities for the companies that actually make the stuff.

So while Sky is frequently criticised by RTÉ for taking a big chunk of the Irish advertising market while investing comparatively little in content here, independent production companies take a different view. For many, the market is a healthier place when there are more potential sources of commissioning cash available – and the more international in flavour the better.

A fortnight ago, in a well-filled room in Dublin’s Marker Hotel, members of Screen Producers Ireland listened attentively to half a dozen Sky executives as they outlined a “shopping list” of the type of programmes they want on their platform. Dramas, of both the Sky 1 kind and the more morally ambiguous Sky Atlantic variety, were high on the agenda.

As part of Sky’s big content push, Sky Atlantic will now have Sky-commissioned dramas on the channel all year-round, which suggests the pay-TV company wants to lower its dependency on the big-name HBO and Showtime shows to which it has exclusive rights. This may prove wise. The Sky-HBO deal expires in 2020, at which point the Time Warner-owned network may choose to hold on to its content as part of its own European business plans.

This is the logic behind events such as May’s Mediacon, a two-day “summit” at Dublin Castle, plus last week’s Mediacon-hosted gathering of television talent at the Irish embassy in London – to focus Irish minds on the global marketplace.

And with people such as Landgraf warning about unsustainable content gluts and “a whole lot of shows that are losing a ton of money”, there is a sense that it may be no harm to try to make hay while the TV sun is still shining.

For now, the new titles keep coming at an insane pace. The next Sky-Showtime one is Guerrilla, a slice of black British history set in 1970s London, executive produced by its co-star, Idris Elba. It begins on April 13th, with all six episodes available on-demand.

I regret to say it looks amazing.