Facebook wants to educate users on how to spot fake news 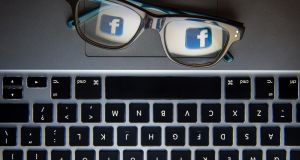 Facebook wants to get “as close to zero as it can” in relation to fake news. Photograph: PA Wire

Facebook has promised to crack down on fake news on the platform by “disrupting the incentives” for people to post it and educating its users on how to spot it.

Users should be “sceptical” of catchy headlines “in all caps with exclamation points” and look closely at the web addresses of stories, as many fake news sites mimic the addresses of “authentic news sources”, Facebook will tell users.

The social media giant also said it wanted to make it “less economical” for purveyors of fake news to create it by limiting its distribution as much as possible.

“We find that most fake news on Facebook is financially motivated not ideologically motivated,” said Facebook vice-president Adam Mosseri.

The purveyors will tailor their headlines and switch political perspectives purely on the basis of which will get the most clicks.

“We’re against it and we want to take it seriously,” he said, speaking via videoconference from the International Journalism Festival in Perugia, Italy.

Mr Mosseri, who has responsibility for Facebook’s news feed, said the spread of fake news was “probably not going to go to zero”, although the company wants it “to go as close to zero as it can”.

In the US, Facebook last month started labelling stories from fake news sites as “disputed”, working with third-party organisations that have signed up to a code of principles published by the Poynter Institute’s International Fact Checking Network (IFCN).

It has also teamed up with media organisations on fact-checking initiatives in France and the Netherlands, while a project is due to launch in Germany soon.

Elections were held in the Netherlands earlier this year, while French and German elections are due.

Identifying misinformation was not a task Facebook could do alone, he added. “We cannot become arbiters of truth itself.”

The Silicon Valley company, founded by Mark Zuckerberg, will from Friday introduce a new “educational tool against misinformation” in 14 countries – not including Ireland – when they open the Facebook app.

The “tips for spotting false news” message will appear prominently in users’ news feeds, with users invited to “check out a few ways to identify whether a story is genuine”. They will be shown the message three times over three days.

Among the ten “tips”, users are asked to consider whether the story might be a joke.

“Some false news stories can be hard to distinguish from humour or satire. Check whether the source is known for parody, and whether the story’s details and tone suggest it may just be for fun,” the social network advises.

Users are also told they can report a story they believe is false to Facebook.

“We need to move into a world where people are more sophisticated about what they read,” Mr Mosseri said.

Campbell Brown, Facebook’s recently appointed head of news partnerships, said the challenge of fake news “goes beyond Facebook”, but that the company hoped to work more closely with publishers, journalists and others to tackle it.

“We are very much part of the news ecosystem. We get that,” said Ms Brown, a former NBC News correspondent and CNN presenter.