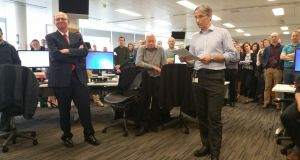 The newsroom of The Irish Times as Kevin O’Sullivan (left), announced he was stepping down from the role as editor role, and that the current deputy editor, Paul O’Neill (right), had been appointed as his successor by the board of The Irish Times. Photograph: Frank Miller/The Irish Times

Paul O’Neill has been appointed Editor of The Irish Times in succession to Kevin O’Sullivan. Mr O’Neill has served as Deputy Editor for almost a decade under Mr O’Sullivan and his predecessor, Geraldine Kennedy.

He joined The Irish Times in 1989 as London Correspondent and thereafter worked as a news reporter, Crime Correspondent, Deputy News Editor and Finance Editor. He had previously worked for the Cork Examiner and the Waterford News & Star.

Aged 52, he is originally from Waterford. He is married to Jennifer and has two daughters.

The board of The Irish Times wished Mr O’Neill well in his new role.

Mr O’Sullivan announced his decision to step down on Wednesday to a packed Irish Times newsroom. Mr O’Sullivan paid tribute to the editorial team at The Irish Times. He said: “In an unrelentingly challenging period, they ensured our journalistic output was frequently in the public interest and enriched the lives of a growing number of readers.”

He said although The Irish Times was facing a demanding period, success was already evident in many ways, with almost 60,000 subscribers in digital and print.

The chairman of The Irish Times, Dan Flinter, said:“Kevin has made a major contribution to the development of The Irish Times over the past six years during a period of extraordinary change in the news publishing sector.”

Mr O’Neill said he was honoured to take on the role of Editor. “The challenges facing so-called old media companies have been well ventilated. But the audience of The Irish Times continues to grow and now includes those who access our journalism via smartphones, iPads and desktops, as well as those who continue to read the newspaper.

“The media landscape is evolving rapidly and the future is not settled. But in a world of alternative facts, falsehoods and hidden agendas, I’m confident that The Irish Times and our independent journalism will continue to thrive.

“As people increasingly question the accuracy of the information presented to them, I believe the standards of quality and fairness associated with The Irish Times will be ever more relevant and valuable to them.”