Regional newspaper group is subject of proposed takeover by INM 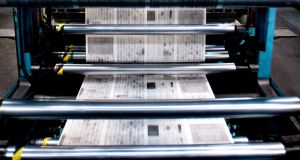 *Celtic Media, the regional newspaper group subject to a takeover bid from Independent News & Media (INM), recorded turnover of €11.3 million and pretax profit of €214,152 in the calendar year 2015, accounts filed to the Companies Office show.

The company recorded redundancy costs of €255,804 during the year, the accounts show, while it had shareholders’ funds of €2.6 million.

Celtic Media chief executive Frank Mulrennan told an Oireachtas committee in February that the business model for local newspapers is “broken” and the future of its seven titles would be best protected by being part of a larger company.

Mr Mulrennan, a former business editor of the Irish Independent, led a management buyout of Celtic Media when it went into receivership in 2012. He is its largest shareholder.

In 2015, Celtic Media employed an average of 122 people, including 33 reporters and correspondents, 32 in sales and distribution and 21 in production.

Celtic Media’s printing business, which employs about 24 people, is not part of the proposed acquisition by INM, which was announced in September 2016.

In November, the Competition and Consumer Protection Commission ruled the deal would not lead to a substantial lessening of competition in any market for goods.

But Minister for Communications Denis Naughten has now referred the transaction to the Broadcasting Authority of Ireland for a full review on media plurality grounds. An advisory panel is due to report its view to the Minister in May, then the Minister is expected to make a decision in June.

* Edited on May 15th, 2017, to remove comparisons between Celtic Media’s revenue and profits in the 12 months of 2015 with those of the previous accounting period, which was 18 months long.