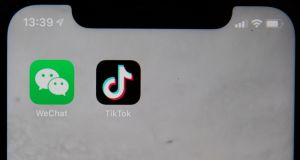 US President Donald Trump has signed a pair of executive orders prohibiting US residents from doing any business with TikTok, WeChat or the apps’ Chinese owners, beginning 45 days from now, citing the national security risk of leaving Americans’ personal data exposed.

The move coincides with Mr Trump’s push for the sale of TikTok, the popular video app owned by ByteDance Ltd, to an American company, and it comes a day after secretary of state Michael Pompeo urged US businesses to remove the two Chinese apps and other untrusted services from their stores.

It threatens penalties on any US resident or company that engages in any transactions with TikTok, WeChat or their owners after the orders take effect.

The bans on TikTok and WeChat mark a significant escalation by Mr Trump in his confrontation with Beijing as the US seeks to curb China’s power in global technology. With the US election less than 90 days away, Mr Trump is making his challenge of China a central theme of his campaign, where he trails Democrat Joe Biden in the polls.

“This is yet another watershed moment in the US-China technology cold war here where the US government is targeting these two very popular Chinese apps and basically saying they have national security problems,” said Paul Triolo, head of global technology policy at Eurasia Group. “It shows the depth of the US concern.”

Earlier this week, Mr Trump threatened to shut down TikTok if its owners didn’t sell the business to a US company by September 15th.

Microsoft has been in talks about a possible purchase of TikTok, an app that’s been downloaded more than two billion times globally and more than 165 million times in the US.

WeChat is the messaging software developed by China’s Tencent Holdings that has evolved into an all-purpose app for people to make digital payments, conduct e-commerce and more. The app is one of the most popular in the world with more than one billion users.

It’s not clear how broadly the order would be implemented for Tencent and WeChat. US companies like Starbucks, for example, use the service with consumers in China.

Tencent is one of China’s most valuable tech companies, and its chief executive Pony Ma is among the many business leaders who serves as a delegate to the National People’s Congress, China’s rubber-stamp parliament.

While the language of the executive orders is unclear, they don’t appear to prohibit people from downloading and using the apps to post videos or message with other people. Financial transactions could be targeted, however. Mr Trump directed the secretary of commerce to identify the transactions that will be subject to the order.

Banning WeChat in the US could have far sweeping implications to cross-border business between Chinese and American companies, impacting everything from the manufacturing of medical face masks and Apple iPhones to the inking contracts for lawyers and bankers.

While WeChat is not popular in the US as a consumer messaging tool, the app is used to for more than chatting with friends and family.

In China, it’s virtually impossible to function without Wechat because it’s effectively a replacement for email and text messages, which are not used as widely in China as they are in the US. Other messaging apps like Facebook-owned WhatsApp are blocked in China, making it harder to communicate with overseas partners without WeChat.

“A ban on WeChat would be consequential because it would practically shut down communication between the US and China,” said Graham Webster, China digital economy fellow at think tank New America. “There are real data, privacy, and security concerns but they go well beyond these two Chinese apps and these orders just wrap the real issues up in political theatre.” – Bloomberg