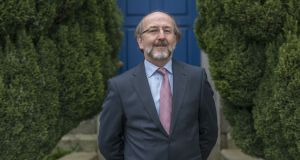 Prof Brian MacCraith: ‘The Government is satisfied with the range of expertise on the commission.’ Photograph: Brenda Fitzsimons / THE IRISH TIMES

The chairman of the Future of Media Commission, Brian MacCraith, has promised to hold “extensive engagement with stakeholder groups” before making its recommendations next summer on the funding of Irish media.

The 10 members of the commission will discuss possible formats and timetables when they meet virtually for the second time this Thursday. It will include “a range of consultation opportunities”, including a public call for submissions, Prof MacCraith said.

“The stakes are very high,” he said of the commission’s task, rejecting “cynicism” about its function.

The commission has been asked to define public service media content and make proposals on how it should be funded over the next 10 years. It is expected to make recommendations on the role and financing of public service broadcaster RTÉ as part of this process.

The pledge to hear the concerns of representative bodies follows disappointment within some industry groups that they were not invited to sit on the commission, members of which were drawn largely from independent or academic backgrounds.

Membership of the commission – which includes former Guardian editor Alan Rusbridger and Storyful founder Mark Little – is now complete following the addition of Siobhan Holliman, deputy editor of the Tuam Herald, in late October. An eleventh proposed member was not available.

“The Government is satisfied with the range of expertise on the commission,” Prof MacCraith said.

Its recommendations will be submitted to the Government next summer when its nine-month term comes to a close, he confirmed. “This will not stretch way out into the future.”

Prof MacCraith, who retired as president of Dublin City University earlier this year, was last December asked to chair what was originally the Commission on the Future of Public Service Broadcasting, but its remit was then widened in the programme for government and the body renamed as the Future of Media Commission.

While this would make the commission’s task “more complex”, it was a “sensible” change that he supported in light of “the fusion of media across all platforms”, he said.

“There has been some cynicism out there: is this another talking shop, is this kicking the can down the road? That is not the feeling on the commission and that’s not the message we’re getting from the Government.”

Separately, Minister for Media Catherine Martin indicated in a remote address to the annual general meeting of Screen Producers Ireland that she intended to explore the idea of requiring international media companies to contribute to the funding of Irish content if they take revenues from the Irish market. In theory, this can be achieved through production quotas or levies.

“This issue is among the matters that I will bring for Government’s consideration shortly ahead of the publication of the finalised general scheme of the Online Safety and Media Regulation Bill,” the minister said.

“It is a complex issue and one that will require careful design to ensure the proposals are effective and deliver desired outcomes,” she added.