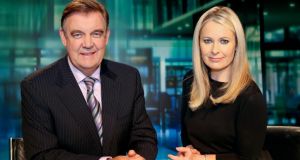 RTÉ’s Six One News presenters Bryan Dobson and Sharon Ní Bheoláin: RTÉ publishes the salaries of its top 10 presenters on a two-year delay

RTÉ is to conduct a review of “role and gender equality” across the organisation following recent controversy over pay gaps.

The BBC was last week forced to disclose the salaries of its top presenters as part of its new royal charter agreement with the UK government. Of the 96 names published on Wednesday, only 34 were women, sparking a row over gender pay inequality.

There have since been calls for RTÉ to publish the salaries of all its presenters. Currently, the broadcaster reveals just its top 10 salaries on a two-year delay.

The National Union of Journalists (NUJ) called for an external review of employment contracts and practices at the broadcaster on Monday, but it appears RTÉ intends to carry out the review internally.

The company said details of the review will be announced “soon”.

RTÉ also said it would “bring forward” its publication of the top 10 list, with details expected “shortly”, but made no mention of publishing details of salaries outside its top 10.

“As an equal opportunities employer with a close to 50/50 gender split across the organisation, RTÉ takes its obligations very seriously,” added the broadcaster.

However, Séamus Dooley, acting general secretary for the NUJ in the UK and Ireland, said the union had “serious concerns” about a variety of employment contracts, with particular reference to gender.

He also highlighted concerns at pay disparities within RTÉ, where staff employed at Radió na Gaeltachta are paid at a different rate to national radio journalists.

“There is a need for a review of employment practices in RTÉ,” said Mr Dooley. “The pay gap highlighted in recent days is reflective of wider problems within RTÉ.

“We need an independent review of employment contracts to establish the extent of the gender pay gap across the organisation – not just among employees but between those engaged as contractors.”

“On air, RTÉ has notably avoided discussing the matter entirely,” he said. “Some of its most popular and prime time shows on both radio and television over the weekend failed to highlight the concern for gender pay scales at the public broadcaster.

“It is in silence that a gender pay gap thrives. Silence, in fact, preserves the gap that exists. Keeping these salaries locked away from public consumption will do nothing to address the potential pay inequality at national broadcaster.”

Séamus Dooley earlier said the NUJ had particular concerns at the wide variety of contracts offered by RTÉ.

“For a number of years we have been demanding clarity on the rationale for offering people doing the exact same job different types of contracts,” he said.

“We have still not received a satisfactory explanation as to why some journalists are offered staff contracts and others are forced to accept self-employed contracts for service.

“There are no objective criteria and we do not accept that editorial prerogative is sufficient grounds for not treating workers equally. It’s important to stress that this is a problem across the organisation and not just in news and current affairs.”

Furthermore, Mr Dooley said the NUJ would seek the support of the RTÉ trade union group and sister unions for its request for an independent review of employment contracts.

“The gender divide is not just about pay – it is also about work practices, which can inhibit the career development of women within the organisation,” he said.

“The time has also come for RTÉ to address linguistic discrimination within the State broadcaster. Radió na Gaeltachta is a national radio station providing a national service and there is no justification for the policy of paying RnaG journalists less than their colleagues based in Dublin.”