Love your staff and treat them well 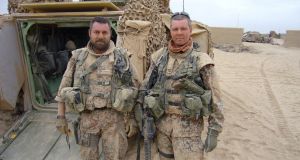 Kim Kristensen (right): the former Danish army colonel led soldiers in Afghanistan and the Balkans before becoming a consultant.

Business has always been full of managers. Watch-tapping, pen-pushing, target-meeting managers. Then we have the entrepreneurs, an often self-appointed moniker that in Irish business is vastly overused. But what do leaders look like?

Kim Kristensen, a former Danish army colonel who later became a leadership writer and speaker, sips his Pepsi in a Dublin hotel and ponders the question.

Long before he entered the business world as a consultant, Kristensen was a leader: he led soldiers through Death Valley in Afghanistan, and through minefields in the Balkans.

“We have too many process leaders, who have learned about procedures and KPIs [key performance indicators] but are not taking decisions.” he says. “Be courageous. Take decisions. Leaders need to be in the frontline. Otherwise they can’t say to their people: ‘follow me’.”

Follow Me: Leading from the Front is Kristensen’s book on leadership, published globally by Dublin-based Maverick House. Peppered with nail-biting examples from his career as an officer and later as a diplomat and strategy consultant, it sets out Kristensen’s eight key principles of effective leadership.

The pillars include concise arguments about how to establish cohesion, trusting your intuition, and leading from the front by placing yourself in the most difficult areas alongside your staff. But the most important principle, Kristensen says, is to “love your employees”, and treat them well.

Can it really be true that in business, all you need is love?

The easiest leadership is to rely on rules, checks and balances

“This is the most demanding principle,” says Kristensen. “I struggled with it. I played with other words, like ‘inspiration’, or ‘passion’. Then it came to me. I needed to use the word ’love’. Why? Because when I was confronted with relatives of dead soldiers, they accepted what happened because they could see how I cared for each soldier. You must be courageous to show caring and compassion to those you lead.”

‘Borgen’ in the boardroom

To an Irish businessperson, this may all sound rather Scandinavian, a bit like Borgen in the boardroom. Think of major Irish business leaders. Did Tony Ryan “love” his staff? Does Michael O’Leary?

On the Irish leg of his promotional tour, Kristensen acknowledges this strain of scepticism: “Many people think this is a ‘female’ kind of leadership. Because it is soft, it is about emotions, and embracing people . . . But this is also the toughest kind of leadership. The easiest leadership is to rely on rules, checks and balances.”

Not all staff want to be loved, however. Kristensen says he has met resistance to the concept in Asia, where leadership is traditionally more hierarchical. But Ireland may prove more fertile. This country is now the European bastion of the Californian new-age management wave. Facebook, Google, Airbnb. companies such as these implement more modern leadership techniques than many indigenous businesses.

It appears the millennials who work in these businesses actually want to be led in a more inclusive fashion. Think of the Dublin office of Twitter’s foray into the Marriage Equality Referendum last year. And if they are effectively led, they will follow.

Kristensen may also have hit upon the zeitgeist when he talks up “female leadership”. How many of the best-known Irish business leaders, who trip easily from the tongue, are women? A handful at most. Perhaps our traditional way of defining strong leadership pushes women to the margins.

There is a dearth of female leadership on Irish plc boards – fewer than 10 per cent of directors are female. The proportion of female executive directors – the real leaders of their companies – is even worse. Kristensen says the leadership style he promotes in his book is the way of the future, and will help more women in senior roles.

“The best types of organisations are the ones with a 50/50 leadership split [male/female]. Conservatives think all of this is too fluffy. But they will lose in the future. For the generations to come, they will expect more women in leadership roles. Leaders will need an approach such as the one I set out.”

Kristensen is in favour of boardroom gender quotas, because he thinks the necessary change cannot be spurred without them.

You can’t lift your company up, 100 per cent, by yourself. It is impossible

He also argues in his book for a form of “servant leadership”, which means putting the needs of your staff ahead of your own. Kristensen also explains that every leader must see themself as a “coach” or trainer.

These days, Kristensen no longer leads army missions. He is currently the master of ceremonies in the Danish royal household – effectively a chief operating officer position, he says. “The queen is chairman.”

But he still consults widely on leadership with businesses and public sector organisations. And, of course, he lectures and writes.

“You can’t lift your company up, 100 per cent, by yourself. It is impossible. But get 10 staff to lift 10 per cent each. Be their coach, not their Il duce [a title used by Italian dictator Benito Mussolini] leader . . . You have to love watching your staff getting better at their job than you are at yours.”