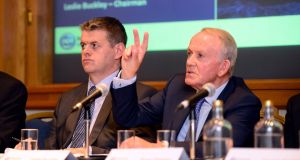 Independent News & Media chief executive Robert Pitt has indicated that he might vote against resolutions that will be put to the company’s shareholders at its agm in Dublin on August 23rd.

The development emerges in a letter issued on Monday to shareholders by INM chairman Leslie Buckley, outlining the agenda for the meeting.

Some seven resolutions will be put to INM shareholders next month with Mr Buckley’s letter informing investors that Mr Pitt “reserves his position” in relation to how he will vote at the meeting. All of the other directors intend to vote in favour of the resolutions.

It would be unprecedented for a chief executive of a publicly listed company to vote against a resolution at his own company’s agm, and this is the latest extraordinary twist in the boardroom saga at INM over the past 12 months.

It is not clear what resolutions Mr Pitt might oppose, but his position in relation to the re-election of Mr Buckley as chairman, and INM’s six nonexecutive directors, will be closely watched.

As an executive director of the company, Mr Pitt is not required to seek re-election to the board.

Mr Pitt and Mr Buckley clashed last year over a proposal for INM to acquire Newstalk, the national radio station owned by Denis O’Brien, INM’s largest single shareholder. It is understood that Mr Pitt wanted to offer a lower price than a valuation obtained by Communicorp, Newstalk’s owner.

Mr Pitt later made a protected disclosure to the Office of the Director of Corporate Enforcement about the row.

Separately, Mr Buckley’s letter states that it has hired an “independent search consultancy” to assist in recruiting additional non-executive directors.

INM is currently not compliant with the UK corporate governance code in relation to the composition of its board, with fewer than half of its directors considered to be independent.

Last week, INM announced that former KPMG managing partner Jerome Kennedy was stepping down from the board, reducing the number of independent directors to two.

INM currently has five non-independent directors, after it had to reclassify two of them in April. One of those, Triona Mullane, was reclassified as non-independent after The Irish Times revealed that her company received previously undisclosed financial backing from a company linked to Denis O’Brien, INM’s main shareholder.

Another executive director, Allan Marshall, was also reclassified as non-independent due to a business relationship with the company. The Irish Times submitted detailed queries to INM about his financial arrangement with the company in the run-up to his reclassification.

INM shareholders have also been told that the company will not be putting its remuneration policy report to the meeting for approval. In the UK, company law requires that this report be put to a binding vote by shareholders but this is not required in Ireland.

Last year INM followed UK practice by submitting the report to a vote on a voluntary basis, with shareholders approving the motion. Mr Buckley’s letter said the resolution would be “put to shareholders again no later than the company’s agm in 2019”.

A spokesman for INM said the company had no comment in relation to the contents of the letter to shareholders.

1 Trinity Biotech expects Covid-19 immunity test to be authorised shortly
2 Michael Smurfit: total lockdown of economies a ‘serious mistake’
3 Tesco to manage customer numbers with 3D imaging system
4 Working from home: New costs, new stresses and little relief
5 Satirical column and photograph of child among complaints to Press Ombudsman
6 Former Quinn Insurance director Liam McCaffrey settles with Central Bank
7 Stocktake: History says this is not a bear market rally
8 Ten of the most mysterious aircraft disappearances
9 We are ‘sale agreed’, but can we go back with a lower offer?
10 How to . . . move (almost) everything to your new phone
Real news has value SUBSCRIBE