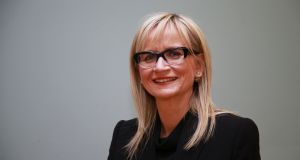 RTÉ director-general Dee Forbes: A ‘lot to be proud of in 2019’, a year in which RTÉ narrowed its annual deficit to €7.2 million. Photograph: Nick Bradshaw

RTÉ narrowed its annual loss to €7.2 million in 2019, a year in which its commercial revenue continued to decline while its public funding rose. This compares to a loss of €13 million in the previous year.

Accounts for the State-owned broadcaster show that its total revenue of €342.1 million in 2019 increased slightly from €339.1 million. This was despite a €4.2 million or 2.8 per cent drop in commercial revenue to €145.8 million as a result of changes in audience viewing habits and the impact of Brexit uncertainty on advertisers.

It received €196.3 million in licence fee income during the year, up by a net €7.2 million. The gain did not come from more people paying the €160 licence fee, but from the €8.9 million RTÉ received in Budget 2019 from the Department of Employment Affairs and Social Protection in respect of free television licences.

This was a “welcome” part-reversal of funding cuts made since 2010, though licence fee unit sales declined year-on-year, eroding some of the benefit. RTÉ said this had occurred “despite growth in net new household formations”.

The broadcaster received 88 per cent of the total €224 million in licence fee receipts collected by An Post in 2019, but it noted that the estimated 13 per cent evasion rate remained “significantly higher” than that found in the UK and other European countries.

RTÉ’s operating costs in 2019 arrived at €337.8 million, down €2 million. It finished the year announcing a string of proposed cost-cutting measures, the majority of which were abandoned after the Government pledged more financial support.

The public service broadcaster is expected to seek about 70 redundancies in 2021. The move springs from a plan agreed with the Government to cut costs by €60 million between 2020 and 2023, although it will also have been among the media companies to suffer a plummet in advertising revenues in 2020 as a result of the Covid-19 crisis.

RTÉ has now recorded a deficit in eight of the last 11 years. Two of three surpluses in this period were modest, while its surplus in 2017 was only achieved as a result of the sale of land at its Montrose campus in Donnybrook, Dublin.

Moya Doherty, chair of the RTÉ board, said RTÉ “cannot run deficits indefinitely” and that the current funding model was “broken”.

“RTÉ will face a material uncertainty about its capacity to provide the same level of services in the medium term if it is not resolved quickly and definitively.”

The broadcaster is “fully engaged” with the Future of Media Commission set up by the Government, she added.

RTÉ director-general Dee Forbes said 2019 had seen the broadcaster produce more original content on RTÉ Player, diversify into podcasts and share its journalism on all platforms to reach more people.

“While there was a lot to be proud of in 2019, it was a year that ended with sadness as we lost our dear friend and colleague, Gay Byrne,” she said.

As of December 31st, some 1,831 people were employed by RTÉ, of which 240 were part-time or casual. Its headcount rose from a tally of 1,822 a year earlier, despite some departures under a voluntary exit scheme first launched in 2017.

RTÉ said there had been an increase in employee levels after an independent review of contractors found 106 people had “attributes akin to employment”. RTÉ offered contracts to 80 people following this review by law firm Eversheds Sutherland and negotiations with its unions.

Total operating costs fell just 0.6 per cent despite fewer “special events” compared to 2018. RTÉ defined special events in 2019 as the cost of broadcasting the Rugby World Cup and covering the local and European elections, which together arrived at €4.1 million. This was some €3.1 million lower than the combined 2018 cost of the FIFA World Cup, the Papal visit and the presidential election.

Television advertising – the biggest element of RTÉ’s commercial revenue – declined 2.9 per cent in a “challenging year” that saw food and motor companies tighten their spending, while radio advertising slipped just 2.5 per cent, outperforming the declining market. In a year in which viewing to the RTÉ Player increased 20 per cent, digital trading revenues climbed 10 per cent.

Despite this digital gain, the trend by which more households are eschewing a traditional television set and watching audiovisual content on other screens is set to have a further negative effect on RTÉ in the immediate term.

The broadcaster noted that the phenomenon had been “growing steadily”, citing January 2020 research from Nielsen suggesting 11.6 per cent of households do not have a traditional set, up 1 per cent year-on-year.

As of the end of 2019, RTÉ had bank borrowings of €60 million, up from €50 million, after it refinanced its loans with Barclays Bank and Bank of Ireland during the year and drew down a portion of the extended borrowings. Its total cash balance, including liquid investments, of €69.1 million.

It spent €15.6 million on capital projects in 2019, up from €17.8 million, with the outlay largely related to transmission network 2rn and a €8.5 million upgrade of studio facilities and other equipment.