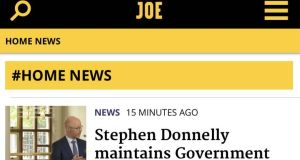 Joe.ie was formerly part of the Maximum Media group founded by Niall McGarry

There has been an exodus of senior management at the company that owns digital publication Joe.ie, while its parent group is also engaged in a strategic review of the business.

Staff at the former Maximum Media websites Joe, Her.ie, and also Lovin Media, which were combined into a group in recent months by UK private equity company Greencastle Capital, were told over the weekend that the chief executive of the business, John Feeley, has left.

It is understood that Mr Feeley had not been present in the business for several months. It is being run on a co-chief executive basis by Greencastle partner Paul O’Donohoe and John Quinlan, who works for Iconic Labs, which was retained by Greencastle to operate the websites it has assembled.

In addition, it is understood that the company’s head of content, former RTÉ presenter Paddy McKenna, also resigned this week and is due to leave in the coming weeks. Several other senior executives have also departed since Greencastle took over. Gillian Fitzpatrick, who was chief commercial officer, left this month for Communicorp, while Gavin Byers, commercial director, has also left. It is believed he is joining Independent News & Media.

Greencastle bought Joe and Her’s owner, Maximum Media, out of examinership last October in a €10.5 million deal. The group, founded by colourful media entrepreneur Niall McGarry, ran into difficulty in 2019 in a controversy over its use of a “click farm” to boost some digital audience numbers, which led to pressure from digital advertising agencies.

In a memo at the weekend, staff were told that all of the Irish websites would be combined under the banner of the Greencastle Media Group. This entity will also include UK-focused brands, Joe.co.uk and The London Economic.

The memo said a strategic review of the business was ongoing and it also mentioned ongoing discussions around “pay reductions”.

Employees were also told that its Dublin offices would be refurbished and that the company may look to hire new employees to alleviate staffing pressures.

Greencastle confirmed the departure of several senior staff in a statement to The Irish Times on Monday evening.

The group is gearing up for a content partnership with Premier Sports, the pay television group whose investors include Mickey O’Rourke, one of the founders of Setanta Sports.