Irish TV viewing boosted by pandemic despite rise of streaming

News programmes dominate annual chart, but a look back to 1970 also appeals 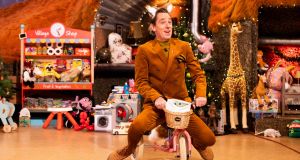 Television viewing increased to an average of two hours and 58 minutes a day last year, up 2 per cent despite competition from streaming services as the threat of Covid-19 kept people at home.

The Late Late Toy Show was once again declared the most-watched programme in the consolidated ratings from TAM Ireland and research firm Nielsen, though pandemic-themed news coverage dominated the upper echelons of the annual chart.

The Toy Show was watched by 1.7 million, making it one of the most-watched programmes on Irish television on record. This figure includes people who consumed the annual extravaganza as it was broadcast on RTÉ One on November 27th or later played back a recording, but it does not include the 575,000 streams the show racked up on RTÉ Player.

Leo Varadkar’s emergency address to the nation on March 17th was placed second on the list, with 1.599 million viewers on RTÉ One. However, the then taoiseach’s broadcast was separately seen by about 240,000 people on Virgin Media One. If the two channels are combined, Mr Varadkar’s total television audience was above 1.8 million, making it the most-viewed broadcast on linear TV last year.

Some 1.3 million people watched the RTÉ Nine O’Clock news on St Patrick’s Day, putting it in third place, while the Six-One bulletin on December 30th as a third lockdown was confirmed was in fourth, with an audience of almost 1.07 million. Only one edition of any programme is included in the list.

The seismic year for news, combined with the cancellation of some major events, meant sport was unusually knocked back to fifth place in the annual chart. The most-watched sporting event was Dublin’s victory in the All-Ireland Senior Football Final against Mayo, played out of its normal spot in the calendar on Saturday, December 19th, and shown on RTÉ2. It had an audience of 877,000.

The Late Late Show itself was in sixth place, with its most-watched edition attracting 876,000 viewers on March 27th, on a day when restrictions to curb the spread of coronavirus tightened and the Republic effectively began its first lockdown. The programme was hosted by Miriam O’Callaghan as Ryan Tubridy was in self-isolation after acquiring what was later confirmed to be Covid-19.

In seventh place, Virgin Media Television made its first of seven appearances in the top 50 list with the Six Nations clash between Ireland and France, watched by 850,000 people on Virgin Media One on October 31st.

An RTÉ News Special on March 27th was in eighth with 829,000, while the popularity of architect Dermot Bannon continued with Room to Improve: Dermot’s Home luring in 777,000 to RTÉ One on January 5th. That made it the most-watched programme of 2020 before the pandemic was declared.

The top 10 was completed by the All-Ireland Senior Hurling Final between Limerick and Waterford on RTÉ2 on December 13th, watched by 713,000.

Ratings body TAM Ireland noted the strong performance of several entertainment shows, with RTÉ’s Dancing with the Stars (12th) and DIY SOS (19th) and Virgin’s I’m a Celebrity... Get Me Out of Here! (16th) joining Room to Improve in the top 20. Almost all of the top 50 programmes were commissioned by Irish broadcasters.

“TV has been a stalwart companion to the Irish nation in a year like nothing any of us have ever experienced before. Throughout the year, TV kept us informed, educated and entertained and, for this, it holds a special place in the hearts of the nation,” said Jill McGrath, chief executive of TAM Ireland.

As on-demand viewing is measured separately and has increased in recent years, the figures do not wholly reflect the popularity of certain shows.

“Looking at the top 50 programmes, it’s clear that Irish stories and content are the programmes that bring people together proving that live programmes, big events and home-produced content are hugely popular,” said Adrian Lynch, RTÉ director of audiences, channels and marketing.

Overall, viewing on the RTÉ Player was up 36 per cent.

Reeling in the Years

A strong year for RTÉ’s current affairs flagship Prime Time saw it draw 681,000 viewers on St Patrick’s Day, giving it 13th spot ahead of Prime Time: The Leaders Debate on February 4th, which was watched by 670,000 and was the most-watched programme throughout Election 2020.

Curiously, a programme that RTÉ first aired in 2002 and has been repeated on many occasions since was the 14th most-watched television programme of 2020. This was the episode of Reeling in the Years that followed the Six-One news on St Patrick’s Day. For half an hour, it transported 654,000 viewers back to the relatively uneventful 12 months of 1970.