Dubliners concert helps TG4 to its best Christmas in a decade 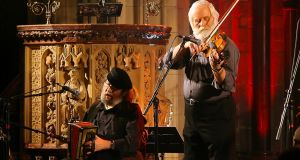 The Dubliners: the late Barney McKenna with John Sheahan performing at Christ Church Cathedral in January 2012

TG4 recorded its best share of Christmas Day television viewing since 2010 and reached its highest number of viewers since 2009, with a tribute to The Dubliners its most-watched programme.

The Dubliners – The Parting Glass, shown on December 25th, included the first showing of a “lost” recording of the late Barney McKenna in his final performance with the band at Christ Church Cathedral in January 2012. The concert was watched by 156,000 people and had an audience share of 11.25 per cent, TG4 said.

Overall, the broadcaster achieved an audience share of 3.6 per cent on Christmas Day.

Another concert, Christy Moore – Come All You Dreamers, was the second most-watched programme on TG4 over the Christmas period. This was watched by 85,500 people on December 27th and had an audience share of 11.2 per cent, while the documentary Maureen O’Hara – Banríon Hollywood was watched by 73,300 people on Christmas Day with a 5 per cent share.

The most-watched programme on Irish television over the Christmas period was the RTÉ Six-One on Christmas Eve, which was watched by 583,200 people. This was 51 per cent of the total number of people watching linear television at the time, according to figures from research firm Nielsen and ratings body TAM Ireland.