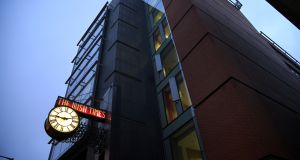 Managing director Liam Kavanagh said it was a “successful year” for ‘The Irish Times’. He expressed disappointment, however, that “newspaper sales have not yet found a floor and continue to fall”.

The Irish Times DAC, the publisher of this newspaper, made an operating profit last year of more than €1 million. This was up from an operating loss of €1.1 million in 2015, as cost control and growing digital income partly shielded The Irish Times from declines in circulation and advertising affecting the whole sector.

Overall revenues at the group, which includes the property website Myhome.ie, fell by almost 2 per cent to €82.1 million.

Advertising revenues reduced by 3.6 per cent while revenues from consumers, which includes newspaper sales, declined by 4.3 per cent.

There has been a significant pick-up in digital revenues, however, which were up 12.1 per cent and kept pace with the gap created by the decline in circulation revenues. Digital income now constitutes 20 per cent of total publishing revenues at The Irish Times.

Overall subscriber numbers, including digital subscriptions, e-paper sales and home deliveries, stood at almost 53,700 at the end of 2016, up from 45,000 a year previously. Managing director Liam Kavanagh said this has since grown further to 61,000 at the end of August 2017.

Operational costs at the group reduced by more than 15 per cent. The group made a net loss of just over €1.2 million, however, due in part to restructuring costs of €1.4 million.

The company also made a €2.6 million payment during 2016 to the staff pension scheme, to enhance transfer values following the swapping of its defined benefit scheme for a defined contribution pension arrangement.

Mr Kavanagh said it was a “successful year” for The Irish Times. He expressed disappointment, however, that “newspaper sales have not yet found a floor and continue to fall”.

He said the business has become “platform neutral” and will provide content to readers in whatever format they prefer, whether it is digital or print.

He said he believed the results prove it was “the correct decision” for The Irish Times to introduce a digital paywall in 2015.

But he said brand advertising is under significant pressure from global digital companies such as Google and Facebook.

“A lot of spend has been diverted to Google and Facebook. The cake is smaller for traditional media companies.”

When pressed to address reports that The Irish Times is close to agreeing a deal to buy Cork-based national title, the Irish Examiner, Mr Kavanagh suggested “there is a lot of water to flow under that bridge yet”.

He declined to comment further on the matter, noting only that the Examiner’s owner, Landmark Media, is a printing customer of The Irish Times.

It was revealed in this newspaper on Wednesday that the owners of The Sunday Business Post have put it up for sale. When asked if The Irish Times is interest in buying it, Mr Kavanagh would only say he is “sure we will have a look”.

“There needs to be consolidation in the newspaper sector and we are interested in playing our part in that. Outside of Independent News & Media, nobody is generating much profit and that isn’t good for the industry.”

Looking ahead, he said trading continues to be difficult and revenues to the end of August are down 3.8 per cent, driven by pressure on brand advertising.

“It is a certainty that we will need to look at our costs,” said Mr Kavanagh.