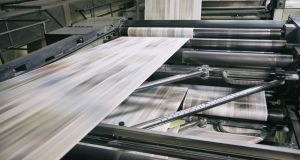 The Clare People regional newspaper has ceased publication, the company said on their website on Tuesday, noting that it couldn’t continue incurring losses associated with printing the title.

The newspaper, founded by Avolon chief executive Dómhnal Slattery, blamed “consistently declining circulation and advertising revenues” as it announced that Tuesday’s edition would be its last.

“It is with deep sadness and regret that the owners and staff of the Clare People announce that the newspaper has printed its last edition,” the company said.

“Since June 2005 we have strived to deliver a quality product to the people of Clare every single Tuesday morning without fail. This we have done in the midst of severe economic and technological headwinds.

“Unfortunately our newspaper cannot continue to sustain the losses we have incurred in delivering a quality product to the people of Clare on a weekly basis in the face of consistently declining circulation and advertising revenues.

“As a consequence of the rapid impact of the internet and free online platforms, the marketplace for quality local newspapers has changed fundamentally.”

Accounts for Clare College News Limited, the company that owns the title, show it had racked up more than €1.5 million in losses by the end of 2017, the latest period for which accounts are available.

In its statement the company paid tribute to its journalists, photographers, sales staff, marketing staff and administration and office staff. According to the 2017 accounts, the newspaper employed 13 staff.

“We would like to thank our loyal readers and all those who have supported us for the past 14 years. We deeply appreciated that support,” the company said.

John Galvin, managing director of the rival Clare Champion newspaper , said he was “very saddened to hear” the news. “I hate to see any newspaper go,” he added.

While circulation for the Clare People is not available from the Audit Bureau of Circulations, it is estimated that it produced 5,000-7,000 newspapers per week.