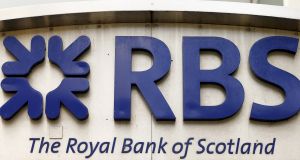 RBS is expected to name the first female chief executive of one of the big British banks. Photographs: Arnd Wiegmann/Reuters

Ulster Bank’s parent group, Royal Bank of Scotland, is expected to name the first female chief executive of one of the big British banks, according to the Sunday Telegraph. Alison Rose, the deputy chief executive of NatWest, is “understood to be in pole position” to take over from departing Ross McEwan. The Telegraph suggested this was part of a move away from the “macho high-risk culture” that caused the last banking collapse.

US hedge fund York Capital has exited Core Reit, an Irish industrial property investment trust whose planned stock market listing was cancelled last year. It has been replaced by another US fund, Pramerica Real Estate Capital, the Sunday Times said. Core owns a portfolio of 106 industrial properties and 167 acres of land, and is expected to have another go at an Irish listing in future.

State insolvency official Chris Lehane is seeking to extend the bankruptcy status of prominent web investor Goff Lalor by 15 years for concealing his ownership of a €5.5 million house in Dalkey, the Sunday Times reported. Mr Lalor, who founded the Punchlime group that invested in various tech businesses, had denied that the house was his family home and said he only “stayed there the odd night”.

The Sunday Business Post reported that Irish Water has been ordered by the regulator to cut its costs by more than €100 million. The Commission for Regulation of Utilities found that the company’s costs for supplying water are 42 per cent higher than its British peers, and up to 62 per cent higher for treating waste water. Irish Water blames its bloated costs on local authorities.

Cost of strikes to Ryanair

An investment bank has calculated that Ryanair could lose more than €30 million if strikes in Britain and Ireland go ahead, according to the Sunday Business Post. RBC Capital Markets calculated the hit on the basis of lost fares and compensation payouts, weighed against cash saved on operating costs and salaries.

The Sunday Independent reported the view of Tom Parlon, director general of the Construction Industry Federation, who claimed critical infrastructure projects were being held up due to “paralysis” in the public sector. He said problems had arisen from the procurement furores at the national children’s hospital and the national broadband plan.

About €2.5 billion will be invested in the Irish tourism sector over the next five years, the industry’s main lobbyist told the Sunday Independent. Ruth Andrews, the new chairperson of the Irish Tourism Industry Confederation, said up to €500 million is expected to be spent on tourism infrastructure annually until 2025.