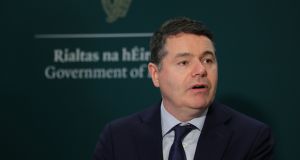 Minister for Finance Paschal Donohoe has projected a budgetary surplus of 0.7 per cent or €2.6 billion for 2020 and nearly double that by 2025. Photograph: Nick Bradshaw

Ireland’s turnaround can be seen in most of the headline metrics around the economy, from employment to growth to wages. However, one area where the legacy of the crisis still reigns is debt. At €215 billion, the State’s national debt is one of the largest in the world and a multiple of what it was before the crash (€43 billion).

The only real way to pay down such a vast sum is to run budget surpluses, which we have started doing. Minister for Finance Paschal Donohoe is projecting a budgetary surplus of 0.7 per cent (or €2.6 billion) for 2020 and nearly double that by 2025.

Even with those impressive numbers, and perhaps the odd addition from a bank share sale, it would still take many years, even decades, to bring the national debt back to pre-crisis levels.

The Government will instead focus on growing the economy, thereby reducing our debt ratio.

Debt as a proportion of gross domestic product is now just under 65 per cent, but when applying the CSO’s bespoke measure of national income (to take account of the impact of multinationals in the economy), modified gross national income (GNI*), its still more than 100 per cent. Nonetheless it has been falling.

Department of Finance chief economist John McCarthy said recently the €1.5 billion surplus generated last year would be used to boost the cash balances of the National Treasury Management Agency, which manages the State’s debts. “Ultimately when it works through the system it will reduce debt from what would otherwise have been the case,” he said.

Of course, a change of government in the upcoming election could change all of that if the next minister for finance decides either not to run a surplus or chooses to use the proceeds in other ways.