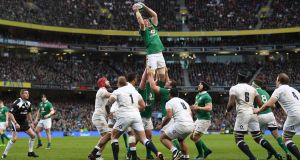 Ireland in action against England in the Six Nations. Photograph: Shaun Botterill/Getty Images

Global investment giant CVC must tell regulators if it intends taking a controlling stake in the Six Nations rugby competition as a condition of being allowed bid for a stake in the Pro14 tournament owner.

The Competition and Consumer Protection Commission (CCPC) has approved CVC’s bid for a minority stake in Celtic Rugby, the Irish company that owns the Pro14 competition, which involves clubs from Ireland, Scotland, Wales, France, Italy and South Africa.

Following media reports that CVC was interested in bidding for control of the prestigious Six Nations series, the investor pledged that it would notify the commission of any such bid, even if it does not meet the threshold at which businesses are obliged to report mergers to the watchdog.

“The CCPC is of the view that the commitment obtained from CVC is appropriate and effective in addressing the identified potential competition concern,” a statement said.