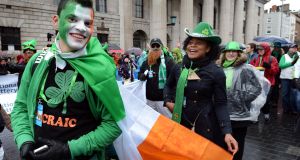 The value of “brand Ireland” rose 26 per cent over the past year to $538 billion (€469 billion), making it one of the fastest-growing “nation brands” in the world, new figures show.

The latest Nation Brands report from Brand Finance, which was set up in 1996 with the aim of “bridging the gap between marketing and finance”, shows Ireland jumped six places in the ranking to break into the top 30.

The report said this could be explained by a combination of factors, including the continued growth of the Irish economy over the past five years and a renewed appeal as a location for domestic and inbound investment.

“Despite US tax reductions, discussions on EU corporate tax harmonisation, and the vagaries of Brexit deal negotiations, brand Ireland proves ever more appealing,” he said.

“Many financial and corporate entities established in the UK continue to head to Dublin to ensure the preservation of EU passporting rights after Brexit.

“Investors from other jurisdictions, including China, Australia and the US, are also continuing to choose Ireland as it remains an attractive location for brands and IP companies.”

A “perceived vulnerability” undermined Britain’s standing on the global stage, which was reflected in its brand strength falling slightly since last year, from 85.3 to 84.8.

However, the report pointed to “a healthy economy and positive growth forecasts” as evidence of the UK’s “resilience in the face of Brexit”. Its brand has recorded a solid 20 per cent growth year on year to $3.8 trillion, replacing Japan in fourth place.

“What the exact scenario and consequences of exiting the EU will be still remain to be seen, but both current market conditions and economic forecasts for the coming years reaffirm Britain’s ability to make the most of its post-Brexit future,” he said.

Topping the table as the world’s most valuable nation brand was the US, which rose 23 per cent over the past year to $25.9 trillion.