From Starbucks to Hollywood, marketers are going all out to scare up seasonal business 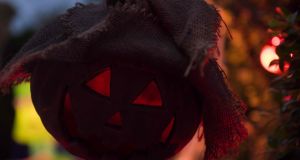 Pump it up: Pumpkin decorations are ubiquitous at Halloween. Photograph: Eric Baradat/AFP The box office success of the new Halloween film, which got out the black sacks and collected an impressive $77.5 million in North American cinemas at the weekend, is open to various interpretations.

One take is that the unsettled real-world mood has somehow created the perfect commercial backdrop for a familiar horror to post the second-highest ever October opening for a film, just a couple of weeks after Marvel superhero flick Venom set a fresh record for the highest-ever October debut weekend. In the age of Trump, Brexit and Nick Clegg going to work for Facebook, who doesn’t like their scary stories contained to a running time of 106 minutes?

Another explanation is that this sequel to the 1970s original is capitalising on the fact that Halloween, the date not the movie, has expanded into the most tenacious of wallet-sucking villains. Every time it comes back around again, it has somehow managed to mutate into something bigger, scarier, longer and requiring of more expensive special effects.

On the one cobwebbed hand, October 31st is still a whole eight days away. On the other blood-dripped one, businesses only planning their Halloween marketing strategies now have already left it too late. The kids who set off fireworks across the road from me start organising for the big night two months in advance. Let the aural evidence be your guide.

Halloween has been the focus of some intense mission creep over the past decade, extending from its original one-night freakshow status into a full-on season designed to form a useful bridge between summer and Christmas. In this it has been helped by the 21st-century schools’ embrace of the fancy dress day, which, thanks to the mid-term break, often occurs way before Halloween itself, helpfully extending the period of “the holiday” for retailers and anyone else lining up to get a piece of the pumpkin action.

Those pumpkins are now in supermarkets from the first week of October; last year, Supervalu said it expected to sell 120,000 of the things in Ireland. Starbucks, meanwhile, began selling its Pumpkin Spice Latte in the first week of September in this part of the world, and even earlier in the US.

This year, there’s been an apparent glitch in the timetable of hype. In London, there are reports that Starbucks has run out of pumpkin syrup, a critical ingredient in its much-copied “PSL”. As ever with these stories, it is hard to tell whether this is a genuine syrup-related hiccup that has cost a handful of stores some seasonal margin, or a fortuitous promotion for the continued existence of Starbucks and its seasonal latte. Either way, the PSL attracts a weird cult following and even weirder lifestyle media coverage, for which digital publishers should by rights be charging Starbucks good money.

As the insane merger of coffee and pumpkin suggests, Halloween is an eclectic festival that rewards wit and imagination while also encouraging bad taste. For most brands with family-friendly images to protect, the trick will be to channel the former without veering into the latter. Every year there’s a new batch of costumes that might be funny to wear, but not so funny to be caught selling. Sometimes the difference is not easily determined in advance. Sometimes, as with the recent “sexy” Handmaid’s Tale costume mini-furore, it is.

And, as Spotify recently found out, there are industry rules against being even a touch too scary in a context deemed inappropriate. Just last week a non-Halloween ad for the music streaming service depicting young people being menaced by a parodic horror-film doll “woken up” by the Camila Cabello song Havana was banned by the UK’s advertising watchdog after a complaint that it had “unjustifably” caused distress to a child.

This isn’t just Halloween season, of course. It’s Halloween and Christmas together, duelling on the supermarket seasonal aisle, separated only by the half-price biscuits. The overlap between the two provokes visual overload and consumer weariness. But expecting retailers to wait until after the skeletons and brooms have been swept out of the shop to “start” their big sales event is missing the point. At a time of intense online competition, bricks-and-mortar retailers need those Halloween browsers to keep them top of mind come Christmastime.

This month’s frighteningly good box office is the product of a not-dissimilar fear. October used to be the awkward month between the summer blockbuster season and the winter holiday one, with only the occasional horror breakthrough. Now the Christmas period is so saturated with titles, film distributors are reassessing the merits of an autumn release.

With Netflix standing in the wings threatening to disrupt its business model, Hollywood doesn’t want to leave even a nanosecond of a calendar vacancy for a rival to fill. So maintaining a constant frenzy is deeply logical. It’s only when things go quiet, after all, that you can hear them go bump in the night.

‘I don’t need to do any of this. . .I don’t actually need to work.’ 15:30
Farm safety equipment to benefit from improved capital allowances 14:14
Ireland wants €100bn in trade with Asia-Pacific region by 2025, says Martin 14:00
Topshop owner fights for surivival putting Irish jobs at risk 13:51
Same Brexit stumbling blocks persist as Barnier travels to London 13:08
Search executive
jobs on irishtimes.com