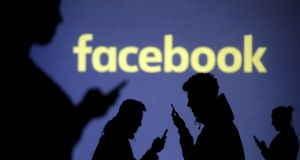 A number of social media companies have been criticised over the past year for security and data protection issues. Photograph: Dado Ruvic/Reuters

Social media giant Facebook and budget airline Ryanair have paid the price for negative headlines over the past year, with both companies suffering a hit to their “customer experience” score in a survey of Irish brands.

Credit unions emerged as the winners for the fourth year in a row in the annual survey of Irish brands, which is based on customer experiences. Amazon claimed second place while hotel group Radisson Blu moved up 28 places to claim third.

The survey was carried out by Amarách Research on behalf of the CX Company and involved about 2,500 respondents.

Overall, after three years of continuous growth, Ireland’s CX Excellence score fell this year by 4 per cent, with only 11 of the 156 companies surveyed improving their score.

A similar pattern has emerged in Britain and the US in recent years. CX Company chairman Michael Killeen believes one of the key reasons is the absence of the human touch in the digital era.

A number of social media companies have been criticised over the past year for security and data protection issues. Google fell 45 places to 64, YouTube fell 46 places to 61, while Facebook dropped out of the top 150 altogether.

“If customers feel it is leaning more towards the provider or [that] a lack of fairness has crept into the relationship, this will clearly have a negative impact on the customer experience and this is reflected in our findings,” said Mr Killeen.

“If you add fears over data protection into the mix, people will begin to question the exchange value of the relationship and may well vote with their mouse.”

Despite a drop in its scores, retail remained the top-performing sector with 61 brands in the top 150 and four in the top 10.

In terms of the travel sector, Luas and Ryanair endured different struggles throughout the year.

“While Luas has actually recovered a little this year, industrial action, overcrowded trams and the disruption caused by the Cross City extension have all left their mark,” said Mr Killeen. “Ironically while new users with low expectations probably view their Cross City experience as positive, existing customers only see the drop in service.

“Ryanair – now in 132nd position – has had a terrible year, largely due to strikes by staff across Europe and changes to their cabin baggage charging policies.

“You have to wonder is their model becoming more redundant for more people here as the recovery gains ground and customers are prepared to pay more for better service.”

Ryanair said the survey was “based on perception”, but added: “We acknowledge that we have improvements to make, which we are continuing to do.”