Tennis and Tokyo: the dream combination 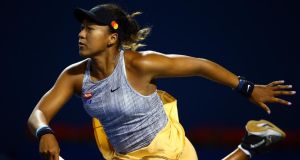 Naomi Osaka has had the good fortune to come to prominence right as the Olympic cycle warms up for Tokyo 2020. Photograph: Vaughn Ridley/Getty Images

Is the money getting better for women in elite sport? Yes. Is there still only one woman (Serena Williams) in the list of the 100 highest-paid sportspeople? Again yes. But the latest list of the top-earning female athletes by wealth tracker Forbes points clearly to where sponsors’ attention is swinging next: Tokyo.

This time last year, only tennis fans had heard of Naomi Osaka. She’s now the second-highest paid female athlete in the world behind Williams, earning an estimated $24.3 million (€21.67 million) in the year to June 2019 to Williams’s $29.2 million.

These two women are way ahead of third-placed Angelique Kerber on $11.8 million. The top 10 is a clean sweep for tennis, where female earning power can be directly attributed to the 1970s feminism of Billie Jean King, though there must surely be more dosh to come for 12th-ranked US soccer player Alex Morgan, the highest-earning non-tennis sportswoman, and her World Cup triumphing teammates.

As soon as Osaka, then sponsored by Adidas, defeated Williams to win her first Grand Slam title at the US Open last September aged 20, a buzz circled that she would eventually take the top spot. This hasn’t happened yet, of course, but the reason Osaka, and not the six winners of the six previous Grand Slams, is tipped for the money crown is simple. She is from Japan.

Despite not winning any Grand Slam titles, Japan’s Kei Nishikori, the fifth-ranked male player, is estimated by Forbes to have earned more than Rafael Nadal in the year to June, with Nadal’s higher prize money not enough to offset the $7 million more Uniqlo-wearing Nishikori was said to have raked in from endorsements.

Osaka (21), a dual citizen (for now) who was born in Japan and raised in the US, has had the good fortune to come to prominence right as the Olympic cycle warms up for Tokyo 2020. Even if she hadn’t doubled her Grand Slam tally with this year’s Australian Open title and climbed to the number one ranking, she was already destined for a big pay day.

So it came to pass in April, with Osaka defecting from Adidas to Nike in a deal that helped her earn some $16 million in endorsements, according to Forbes – twice as much as her prize money in the year. The US sportswear giant showed how much it valued its new signing by exempting her from its rule barring other sponsorship patches. As such, Osaka continues to wear the logos of Japanese companies Nissin Foods and airline ANA on her outfits.

With the exception of Adidas-backed German Kerber, Nike now sponsors four of the five highest-earning female athletes. It wisely picked up fourth-highest earner Simona Halep at an opportune moment, too, some months after Adidas failed to adequately renegotiate its contract to the Romanian’s satisfaction after she became number one – the gap between contracts meant the top-ranked woman at the 2018 Australian Open played her way to the final in an unbranded outfit ordered off the internet. She has since won two Grand Slam titles in the Nike “tick”.

Nike’s splurge on Osaka won’t have silenced “Naomi who?” questions. Aside from a nervous round of US chat show appearances last autumn, her profile is some way off “transcending ” her sport as Williams and sister Venus have done, or even gaining a Maria Sharapova-like notoriety with that queasy section of the press that prefers blondes.

Osaka is a disarmingly frank, offbeat Generation Z-er, but also ultra shy. Even if she can achieve consistent career glory, a Serena-esque level of fame doesn’t seem like it would be a comfortable experience for her.

Conversely, it’s hard to imagine anything but further upward trajectory in the earning power of Williams. Never mind that the 23-times Grand Slam champion is closer to the end of her court career. Williams is so hugely loved in the US, where her brand has been indelibly linked with her motherhood – “I have a daughter,” she emotionally reminded the umpire during last year’s US Open controversy – that it shouldn’t matter if she doesn’t overtake Margaret Court’s 24 Slam titles (amassed when many top players didn’t travel to the Australian Open).

The women who adore Serena are hardly going to adore her any less for losing the three Grand Slam finals she has made since returning from maternity leave. So for Nike, Serena is win-win. Indeed, it is Williams who does Nike the favour.

“It’s about learning from mistakes and doing better,” the player said of the company shortly after it admitted reducing sponsorship payments to other pregnant athletes. The policy, since revised, was criticised by several athletes on its payroll for not quite living up to Nike’s many inspirational slogans in support of women.

All that talk of inspiration can feel like a broken record if not crafted well. Anyone who has ever listened to sportswomen speak – or read their social media feeds – knows they are often hilarious, always three-dimensional, and not lacking in camaraderie. Yet for some reason this is rarely reflected in the official messages. Instead, advertisers’ wearying obsession with greatness is interrupted only by quick references to “the struggle” that leads to . . . more greatness. Yes, they are great. We know.

Nothing tells a story like cold, hard numbers. Only 15 sportswomen earned more than $5 million in the year to June, said Forbes, while about 1,300 men did the same. The commercial power of women’s sport may be rising – just ask Nike how many US women’s team soccer jerseys it sold this summer – but few sponsors are leaving it all out on the court just yet.