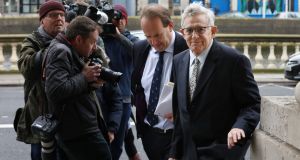 Journalist Sam Smyth, one of the “INM 19”, arrives at the Four Courts on Monday. Photograph: Collins Courts

When Mr Justice Peter Kelly, president of the High Court, yesterday wryly mused that he would have to “pour a quart into a pint pot”, he was complaining about a shortage of judges to deal with a burgeoning caseload.

He could have been describing the scene in front of him in courtroom number four, which was packed beyond its intended capacity as a phalanx of journalists and lawyers, sardine-like, squatted on every square inch of the room.

As the judge rattled through a list of cases, everybody hung on for the main event: the application by the State’s corporate watchdog, the Office of the Director of Corporate Enforcement (ODCE), to appoint High Court inspectors to publishing group Independent News & Media (INM).

By 3pm, an hour after proceedings started, it was showtime.

Neil Steen, counsel for the ODCE, suggested to the judge that he “may have seen” some of the media coverage of the impending case recently, including allegations of a huge unauthorised data breach at INM.

“I don’t live on the moon,” replied Mr Justice Kelly, drawing the first ripple of laughter from his rapt audience, for that is what we seemed to be.

Almost as soon as the hearing began, it went off piste. Shane Murphy, counsel for INM, said his client wanted a judicial review of the ODCE’s move. If granted, this would have the effect of aborting the application for inspectors before it drew a first breath.

Steen said it was the first he had heard of a judicial review. The judge’s eyebrows remained arched in surprise as he addressed Murphy on this latest plot twist: “Tell us about about this judicial review you seek.”

INM’s counsel argued the ODCE’s application was faulty because it did not afford the publisher a chance to make submissions.

“I’ve never heard of such an application,” said Mr Justice Kelly, who asked Murphy if he was really saying that a regulator must seek submissions from the regulated before applying to have them inspected. Murphy confirmed he was.

In short order, while Steen and Murphy addressed the judge, solicitors for both sides drew up a proposed agreement on how to proceed. Murphy offered a handwritten version to the judge.

“Hang on, I’ve a more legible one here,” said Steen, neatly capturing the unfolding sense that the INM-ODCE show is an improv.

The judge was told third parties were in court seeking access to the ODCE’s grounding affidavit. It contains allegations that at least 19 prominent individuals had their data “interrogated” as part of the alleged data breach.

Blaydon, a company controlled by INM’s largest shareholder Denis O’Brien, allegedly paid for the data interrogation, which included the emails of selected INM journalists as well as some lawyers for the Moriarty tribunal.

Collins rose to explain that his client wants access to the documents. As he sat down, Tom Mallon, barrister for former INM chief executive Robert Pitt, whose whistleblower complaint sparked the investigation, rose to ask for the same.

Then began lawyer whack-a-mole. As soon as one sat down, another rose to their feet elsewhere in the room. Next came one for INM’s chief financial officer, Ryan Preston. Then another for the Data Protection Commissioner. Then one for journalist Sam Smyth, another of the “INM 19”.

“Anybody else?” asked Mr Justice Kelly. “And will you all be seeking the boxes and boxes of the affidavit’s exhibits too?”

As the throng of lawyers argued over access to the documents, the three boxes in question sat in the corner of the room, two feet from the nearest journalists.

Kelly addressed widespread media reporting of the ODCE’s affidavit before it had been opened in court, imparting a rather cultured warning to newspapers that would have to negotiate between “the Scylla of contempt of court and the Charybdis of defamation” for their coverage.

“What is he on about?” murmured journalists, stumped by Greek mythological reference, which effectively means to negotiate a route between two mortal hazards.

After proceedings concluded, with dates set for further hearings, the audience dispersed from the courtroom, clearing its heavy air. Journalists milled in the Round Hall outside. Lawyers compared notes.

On the street outside, Karyn Harty, a lawyer for INM, loaded the boxes of evidence – so sought after by so many of the room – into the boot of a taxi.

The show must go on.

1 Fianna Fáil may have just pressed the pause button on the property market
2 Who are Ireland’s 17 billionaires?
3 Saudi prince’s WhatsApp account ‘directly involved’ in Bezos hack
4 European investor acquires Harcourt Road offices for €55m
5 Corporate tax change is inevitable, says Donohoe
6 Are there annual limits on inheritances or gifts to a child?
7 Irish organisations struggle to comply fully with GDPR
8 New blow for Ted Baker as accounting scandal doubles in size
9 O’Flynn company ‘mistakenly’ got go-ahead for Birmingham project
10 My father in a nursing home wants to gift me his house
Real news has value SUBSCRIBE