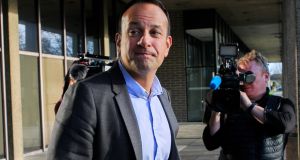 Leo Varadkar: ‘Over the next five years we can look forward to building a much better country.’ Photograph: Gareth Chaney/Collins

Taoiseach Leo Varadkar and Fianna Fáil leader Micheál Martin have laid out their stalls for the general election now expected to take place early next month.

Mr Varadkar is set to seek a dissolution of the 32nd Dáil this week.

He indicated heavily on Sunday that he will call an election in the coming days because the tight Dáil arithmetic had meant “circumstances had changed” since he previously stated he wanted to go to the polls in May.

“I’ll end any uncertainty as soon as I can,” Mr Varadkar told RTÉ’s This Week, before adding that, as it stands, the Cabinet will meet on Tuesday and the Dáil will reconvene on Wednesday after the Christmas recess.

Mr Varadkar, however, has not given indications on his exact plans. Political speculation also suggested he could seek a dissolution of the Dáil from President Michael D Higgins on Wednesday or Thursday.

President of the European Commission Ursula von der Leyenwill be in Dublin on Wednesday.

The Taoiseach sought to portray Fine Gael as the party best placed to continue economic growth and handle the next phase of the Brexit negotiations.

Mr Martin told The Irish Times there will be “an avalanche of Fine Gael spin” over the coming weeks.

“But some core facts cannot be spun and will form the foundation of this election,” he said.

“A whole generation of people have seen the dream of home ownership slip away. And all across the country families are simply terrified at the prospect of their loved ones having to be admitted to hospital because of the record numbers of people on trolleys and the lack of support for those working on the front line.”

In a sign of sparring likely to feature in the campaign, a Government Minister described some members of the Green Party as “nutters”.

Minister of State for Local Government John Paul Phelan made the comments in a speech at an IFA dinner in his native Kilkenny on Saturday night.

According to one source present, Mr Phelan said: “There are lots of good people in the Green Party, but some are nutters.”

In response, Green Party Dublin Rathdown TD Catherine Martin said: “That is language unbecoming of a Minister. If that is the type of campaign that is going to be run by Fine Gael, then I don’t think the electorate will thank them for it.”