Nothing fazes David Attenborough but for anyone else, Blue Planet II is an inspiring and humbling education

In a preview of the first episode of Blue Planet 2, giant trevallies are show launching themselves out of the water to catch fledgling terns. Video BBC 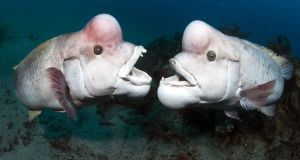 Two male kobudai fighting. When a female kobudai reaches a certain size and age she can turn into a male. Photograph: Tony Wu/BBC

Just what does the planet have to do these days in order to impress David Attenborough?

It isn’t that the iconic presenter’s voice of quiet reassurance is ever less than enthusiastic about the hidden wonders of the natural world. We find him at the beginning of Blue Planet II (BBC One, Sunday, 8pm) at the prow of a ship introducing us to the most vast and least explored part of the world, and “creatures beyond our imagination” that the rapid evolution of nature documentaries can finally reveal. Yet Sir David, whose warmly omniscient narration of the natural world now conveys the sense that he may have created it, already seems quite familiar with them. Marine life and he; they roll deep.

In this gorgeous documentary, a feast of visuals and, more surprisingly, sound that has been four years and several thousand leagues in the making, you encounter dizzying mysteries and quietly devastating discoveries every couple of minutes.

An unsuspecting tern glides above the shimmering Indian Ocean. Suddenly a pale silvery apparition propels itself up from the water, arcing through the air like a tomahawk, grabs the bird in its humongous mouth and whips it back down into the sea. “The Giant Trevally!” Sir David says, in the unflappable tone of a headmaster encountering the school rascal: Well, well. We might have known. Only one thing stumps Attenborough: why do the mobula rays leap majestically out of the water? “No one knows,” he whispers. We could hazard a guess, though: They want to be on the show.

And who could blame them? Blue Planet II is an inspiring and humbling education. Appropriately, we begin with a school of dolphins, apparently during recess. They have gathered off the azure shores of South Africa to surf the massive swell. Why? Just for fun.

Plunging beneath the waves we later see two responsible dolphin parents encouraging their calf to rub against fronds of a coral with presumed medicinal benefits. The keen intelligence of dolphins has long been a subject of both immense fascination and steadily creeping concern. If they are our intellectual equals, for instance, will they ever forgive us for Flipper?

To see a tiny, technicolour tuskfish painstakingly batter a clam open against an improvised anvil, is to recognise a fish using tools. “Some fish are much cleverer than you might suppose,” says Attenborough. Take the astonishing scene, off the coast of New Zealand, where a school of dolphins frantically flees a hunting party of false killer whales then abruptly pivot position, and combine forces instead.

Or the actual killer whales – orcas – who collaboratively herd galaxies of herring together – filmed from above they form shifting black clouds in the clear water – and stun them before feasting. A few beats later, humpback whales arrive to devour the spoils.

There’s always a temptation to anthropomorphise animal behaviour; to conceive of the distinct evolution and display of separate species as a kind of flattering impersonation of our own. Attenborough is allowed one wry gag, at the fearsome sight of the Japanese kobudai fish, whose bulbous face recalls something Hieronymous Bosch might have dreamt up after too much cheese. “In female terms, he’s particularly handsome,” says Attenborough. Oh, David, you sly dogfish.

Those terms, however, are subject to extraordinary change. One female kobudai skulks away to completely transform gender, emerging later to brutally depose the ruling male. So long, handsome.

The programme employs an absorbing storytelling technique, concentrating on a mother and child walrus, chosen from an unhappy wilderness, crammed together on the vastly diminishing icebergs of the Arctic. That 40 per cent of this ice has melted in the last 30 years should be alarming enough. But the show knows the viewing habits of its own fauna and hopefully what it needs to do to budge them from complacency. Just like that ingenuitive tuskfish (and at the risk of zoomorphism), Blue Planet II has its tools, and it knows how to use them.