Also, a new podcast which examines why people engage with celebrities’ photos online 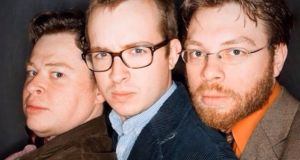 The McElroy brothers host the weekly podcast, My Brother, My Brother and Me, wherein they answer the problems of their listeners, and deep-dive Yahoo Answers for the often frankly insane questions posed by the good folks of the internet.

You Must Remember This

Karina Longworth’s in-depth study of the secrets of old Hollywood has moments that feel oddly current in this particular episode. In what feels like a passionate history lesson, she covers in detail the darkness behind the magic castle: Walt Disney’s anti-Semitism, propaganda movies, and collusion with the American government around wartime.

The Disney studio’s current position as a squeaky clean children’s entertainment cultural powerhouse was not always so: Longworth examines the critical and financial failures of films we have now come to think of as classics.

This isn’t just a list of historical trivia: there’s a structure to the storytelling here that leads us back in time, and unintentionally speaks a little eerily about the present in doing so. A surprising moment of lightness in an otherwise slightly damning portrayal of the House of Mouse is some archive audio of Donald Duck having an argument with a disembodied voice about income tax: the chasm between the brightness we see on screen and the darkness in the studio is a steep one. Longworth’s exploration is well worth the dive.

My Brother, My Brother and Me

The McElroy brothers, Justin, Travis and Griffin, host a weekly podcast wherein they answer the problems of their listeners, and deep-dive Yahoo Answers for often, frankly insane questions posed by the good folks of the internet.

This episode begins musically, moves into some almost-seasonally-appropriate spookiness, and heavily features bees. Stick around for the question about the parent who is afraid of buttons.

The query about the accidental party crasher, and the resulting answer is both horribly painful and totally hilarious. The three brothers’ voices do, of course, sound quite similar, which initially can get a little confusing. However, learning who is who and the roles they play to one another makes My Brother, My Brother and Me a greatly rewarding listen.

There are few enough things like listening to a group of folks trying to make each other laugh in good spirits, and willingly taking each other up on jokes and gags. I treat it as an audio gift every Monday, an hour of goodness and silliness. I wouldn’t necessarily call it an improv podcast, but the dynamics between the brothers and the nature of the questions mean there’s a lot of playfulness and almost no cynicism. This combination makes the resulting weekly shows a breath of fresh air.

New Podcast of The Week:

Why’d You Push That Button?

Still in its infancy, this fascinating podcast takes a glimpse at the science and social phenomena of our behaviour online. This episode looks closely at why exactly we engage with celebrities’ photographs online even though we are but one of a million hearts under that photo, and Kylie Jenner doesn’t care whether we like it or not.

It examines influencer culture, why we like what we like and where business intersects with that. The hosts, Ashley Carmen and Kaitlyn Tiffany, are charming and lively, even as they delve into the ins and outs and maybes and maybe-nots of why her boyfriend liked a questionable picture of a less than dressed celebrity on Instagram.

This episode oscillates between how the internet makes us feel and behave, and the cold science of exactly why, which is a pretty cracking combination. The new microbehaviours we’ve developed as users of the internet are worth looking at, and this podcast seems to be a great place to start.