StoryStock.com in Kerry could seek external investment of €250,000 to fund growth 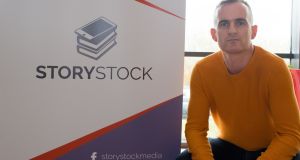 StoryStock’s Francis Fitzgibbon: “StoryStock.com is not a breaking-news platform. We are a story-based platform that deals with ‘why’ things happen, not ‘what’ happened.”

StoryStock chief executive and founder Francis Fitzgibbon worked in traditional media for more than over 15 years before deciding to start his own company in 2016.

Mr Fitzgibbon, who had previously worked as a reporter and producer at Newstalk radio and as a policy adviser in the European Parliament, says the time felt right to take a chance and start his own company.

StoryStock.com was born out of the 39-year-old’s love of stories and media. The company is seeking to build one of the world’s largest communities of journalists and storytellers as well as creating a massive digital archive, featuring ordinary people with stories to tell.

Last year the company company was successful in its application for a grant of €20,000 from the local enterprise office in Kerry. It later received help from Enterprise Ireland (EI) in the form of Innovation Vouchers worth almost €15,000, which helped to develop their software platform.

This year the company entered the Enterprise Ireland New Frontiers programme, which is a structured accelerator scheme where participants are given a stipend and access to some of the country’s top business mentors.

StoryStock.com applied for competitive start funding from EI in March 2017 and was one of a handful of companies chosen to receive a €50,000 cash investment from the state agency.

This programme is designed to accelerate the growth of start-up companies that have the capability to become high potential start-up (HPSU) companies, businesses with the potential to create 10 jobs and €1 million in sales within three to four years of being established.

“I set about creating a software platform to build a community of journalists and storytellers all around the world,” he told The Irish Times. “I knew that the world is full of great storytellers who, with new mobile technology, could collect great stories from the communities they lived in.

“StoryStock.com is not a breaking-news platform. We are a story-based platform that deals with ‘why’ things happen, not ‘what’ happened. Personal story is one way that helps us explain the ‘why’.

While there are some similarities, StoryStock.com is a completely different offering to Storyful, an Irish media company set up by former RTÉ journalist Mark Little in 2010 and later sold to Rupert Murdoch for €18 million.

“Mark Little has been very helpful to StoryStock.com but our business model focuses on bringing great stories from the hearts of local communities to media and brands,” Mr Fitzgibbon explains.

“Storyful operates principally in the crowded breaking-news space whereas StoryStock.com is about giving brands and media great stories and great content from local communities.”

The Kerryman says he has no regrets about leaving his pensionable job in the European Parliament and returning to rural Kerry.

“I had worked in media for 15 years during which time I saw it becoming increasingly disconnected from local communities. I decided to take a chance and set up the company that at the time, I wasn’t even sure would work.

“Enterprise Ireland has a new programme called New Frontiers. This allows entrepreneurs to apply and pitch their idea and each region will select about 10 companies to get a stipend of €15,000. I applied and was successful and was placed on an accelerator programme.

“By doing that, we are creating a network of content creators. We built the technology to allow our global storyteller community to upload hyper local stories to a digital bank of content.

“I had worked in media for 15 years during which time I saw it becoming increasingly disconnected from local communities. Many outlets were cutting costs as Facebook and Google ate into advertising revenues. They needed more content to fuel growing digital arms but they weren’t investing in creating content – rather rehashing content to fill space,” adds Mr Fitzgibbon.

StoryStock wants to partner with media organisations who want to be at the cutting edge of broadcasting and print journalism.

They can license stories for 14-day periods for small fees and use them as their own.

“We have also developed commissioning software that allows media to commission any of our storytellers anywhere in the world, to tell any story. Suddenly, we can provide media with an army of content creators and journalists, on the ground, delivering hyper-local content and stories from the hearts of local communities worldwide.”

The European Commission and Dairymaster in Causeway, Co Kerry, are two clients of the company.

“If you are a news organisation, we can provide you with a global community of content creators who can bring back stories about Donald Trump, but can also bring back Irish stories. We can get them into the hearts of communities.”

While StoryStock has not yet turned a profit, the start-up hopes to be in the black in year two.

“We are making money but we spent a lot of money developing the technology. It’s something that will take about three years to fully develop. We have a plan in place. At this point in time, we are starting to dip our toes into the water looking at potential investors.”

StoryStock.com is looking to take on investment of up to €250,000 in its first funding round towards the end of 2017, and is expected to begin operating in the UK and US in 2018.

“Life is about taking chances sometimes and this is one goal I am confident is going to be a success. If media is to survive it has to reinvent itself. It has to reflect the conversations happening in local communities – delving into the hearts of communities across the world to shine a light on what matters to people.”