Seen and heard: In Brexit news reports of IDA attempts to lure First Derivatives across the Border 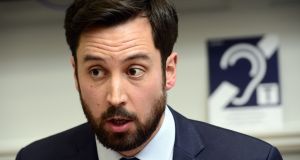 Minister of State for Housing, Eoghan Murphy, has called all 31 of the Republic’s local authority leaders to an “emergency summit on housing and homelessness” next month

Ireland’s ongoing crisis with affordable housing gets plenty of airing in the papers with the head of the Housing Agency telling the Sunday Business Post that the State is allowing too much development “to be dictated by landowners and developers”. Meanwhile, both the Sunday Times and Sunday Independent report that the Minister of State for Housing, Eoghan Murphy, has called all 31 of the Republic’s local authority leaders to an “emergency summit on housing and homelessness” next month, warning that some councils are not treating the crisis with the urgency it requires.

In Brexit news, the Sunday Independent reports that the IDA is seeking to lure Newry-based financial software firm First Derivatives across the Border. Meanwhile the Sunday Business Post says US banking giant Citigroup has warned that the exposure of Irish exporters and their lenders to Brexit will slow down the recovery of Ireland’s banking sector. As British official prepare to release key policy papers, the Sunday Telegraph says Theresa May is to offer free movement to Irish citizens in and out of Britain in what it dubs a “Schengen area” between the two States.

The Minister for Finance Paschal Donohoe has confirmed plans to drop the debt reduction plans set by his predecessor, despite warning from the International Monetary Fund and the Irish Fiscal Advisory Council. The Sunday Times reports that the minister has confirmed he will ease back on the pledge to cut national debt to 45 per cent of GDP by the mid-2020s in order to maximise spending on infrastructure. It says the minister, in a letter to Ifac this weekend said he would be sticking to an earlier target of cutting public debt to 55 per cent of GDP.

Amid multiple stories analysing the departure of Paddy Power Betfair chief executive Breon Corcoran in all the Sunday papers, the Sunday Times reports that the gambling group insists it “strictly adhered” to its disclosure obligations surrounding the news. Sky News broke the story last weekend that recruiters had been hired to find his successor. In interviews after the announcement it was stated the firm was told of the departure late last year and carried out a succession process that was “international in scope”. In a letter to the Financial Times on Friday, Christopher J Airey, a former director of London finance firm Stockdale Securities, said the handling of the situation displayed “ a remarkably cavalier attitude” to the firm’s “disclosure obligations”.

In what may be an attempt to bring peace to the embattled boardroom of Conroy Gold, the Sunday Independent reports that its largest shareholder says he hopes to agree a settlement that would see the the firm’s founder Prof Richard Conroy remain as chairman.

Independent TD Michael Healy-Rae was won a lucrative postal sorting contract from An Post. The Sunday Business Post reports he had initially opposed the decision to centralise mail sorting in part of south Kerry. The move meant local post offices would lose up to €8,000 in annual sorting fees, the paper estimates. However, Mr Healy-Rae’s post office in Kilgarvan ha now won the contract to carry out the centralised mail sorting operation.

The Sunday Independent reports on what it says is a dramatic surge in the number of planning applications for solar farms in the last two years. It says 225 applications have been received by local authorities since June 2015. There were no applications before then. According to the report there is just over 1.5 gigawatts of solar energy “within the planning pipeline.