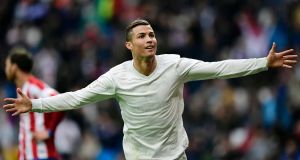 Sending revenues to Ireland would allow Ronaldo to pay 12.5% on profits, as opposed to 43.5% in Spain. Photograph: AFP

A German MEP has accused Ireland of “tax dumping” after it was revealed that Real Madrid football star Cristiano Ronaldo has used an Irish company for many of his commercial contracts, instead of a company in higher-tax Spain.

The footballer appears to have used a Dublin image rights company, Multisports Image Management (MIM), to conclude many of his contracts, including deals with mobile phone companies and sportswear manufacturers.

The document, which appears to be a €1.1 million contract between MIM and Mobily, gives the Saudi company access to Ronaldo’s image rights for an advertising campaign and limited social media marketing. The document also names Andy Quinn, a Dublin accountant who was until August a director of MIM.

By sending the revenues to Ireland, where corporation tax on profits is 12.5 per cent, Spanish media said Ronaldo avoided a potential 43.5 per cent rate he would have faced if he had used a company in Madrid.

Sven Giegold, a Green Party member in Germany and an MEP, said “it comes as no surprise that the company is located in Ireland given the country’s low corporate tax rate”.

He called for a minimum corporate tax rate across Europe to prevent a “race to the bottom”.

Ronaldo also reportedly used MIM, which was set up in 2004, for contracts with Nike, Unilever, Kentucky Fried Chicken (KFC), Konami and Toyota Thailand, according to Spanish media.

The latest available accounts for MIM, dated the end of 2014, show that at that point it had cash in its bank account of more than €4 million. Ronaldo is not named anywhere in its incorporation documents.

Mr Quinn could not be reached at his Dublin office, while his business partner Liam Grainger, who has signed company documents on behalf of MIM, had not responded to a text to his mobile phone.

A woman who answered the phone at the landline provided for MIM said she would pass on queries to the two men about Ronaldo’s use of the company.