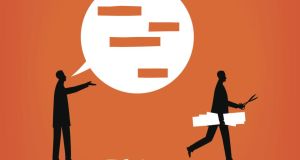 Each Sunday, Renatus produces a lengthy “synopsis” of the business news of the three Sunday broadsheets. Photograph: Getty Images Secretary Adam Lerrick: eight months on from his nomination, he has yet to receive even a date for his Senate hearing

Given a choice between paying something for a product, or paying nothing for an unauthorised version, many consumers will plump for the latter if it still meets their needs. Between one-third and a half of all adults, for example, admit to consuming pirated content – numbers vary between studies, but the range is consistent.

Digital media didn’t invent people’s predilection for a freebie, but it has made it much easier. Old habits, new opportunities. A hot-tempered row online this week between some Irish Sunday newspapers and a private equity firm that takes their content to build relationships with potential clients exposed the growing ambivalence in consumer attitudes towards intellectual property in the digital age.

The private equity firm is Renatus Capital Partners, co-founded by Mark Flood, who formerly ran the Irish operation of the Racing Post. It invests in SMEs and its portfolio includes the Boojum chain of burrito bars and Simtech Aviation.

Each Sunday, Renatus (which, incidentally, is the Latin for born-again) produces a lengthy “synopsis” of the business news of the three Sunday broadsheets – the Sunday Times, the Sunday Independent and the Sunday Business Post.

It emails this synopsis – which fillets most of the papers’ best stories, up to 25 from each, and presents it in a digestible format – to thousands of people on its mailing list early each Sunday. The missive sometimes runs to more than 3,500 words – enough to fill more than two broadsheet pages – and it tends often to lift large chunks of text, original reporting and quotes from each newspaper.

If thousands of people receive a bald-but-free “best of” version of the newspapers’ content directly into their inboxes early on a Sunday, does that make them more or less likely to go out and buy those newspapers to get the full version?

Is this a sort of philanthropic free newspaper promotion service put on as a public service by Renatus? Or is it simply lifting the proprietary and expensively-produced content of other organisations to promote its own ends, caring not a whit about the damage it does to the publications’ commercial interests, and the livelihoods of the staff who produce them?

Everybody knows newspaper sales are falling, and there is no need to rehash their prospects here. Suffice to say the newspaper industry as a whole is becoming belatedly protective of its content, and sensitive to anything that could be perceived as a threat to sales that are already under crippling pressure.

The row blew up online when Tom Lyons, the deputy editor of the Sunday Business Post, took Renatus to task for taking large amounts of the newspaper’s content without permission. He launched a social media blitzkrieg against the firm, accusing it of ignoring repeated requests to desist from lifting vast chunks of its content for its own promotion.

Flood, who says he has no wish to damage the livelihoods of people who produce newspapers, yesterday said he has decided to “change the format” of the Renatus “synopsis” but it has “yet to be decided”.

Meanwhile, the varied responses from observers to Lyons’s online complaints, exposed a casual apathy among some members of the business community to disputes around intellectual property. It is, perhaps, a consequence of the digital age. Many backed his crusade to protect his paper’s interests and intellectual property, but others shrugged their shoulders and said Renatus is simply filling a gap in the market.

One chief executive of an artificial intelligence company said it was merely “curation” of content – it appears to be much more than that – and erroneously compared it to radio newspaper reviews. Others described it as “free advertising” for the newspapers. Another prominent tech investor said the Renatus synopsis “serves a purpose the market wants” and it is newspapers’ responsibility to come up with a competing product based upon the “curation” of their rivals’ content.

There will, of course, always be a gap in the market for stuff that people can get for free, and that will never be filled. News is never free to produce, however.

And while it is true that newspapers’ content delivery models are broken and in need of complete reinvention, should that mean that others can simply be allowed take that content without paying anything towards its production, and distribute it to the masses for their own ends? Of course not.

The problem for the newspaper industry, however, is that if its survival comes down to an appeal to people’s ethics or morals, its war is already lost. People often display a positive disposition towards ethical consumption. But when it comes to their buying behaviour, they tend to find it hard to resist a freebie.

No matter how justifiable the grievances, creators of content will eventually have to find a way of moving with the machine. Eventually, they will.

– It seems that one of US president Donald Trump’s nominations for the department of treasury, proposed under secretary Adam Lerrick, just cannot escape the quicksand in his attempts to secure Senate clearance for his appointment.

This is due – at least in part – to concerns among Democrats on Capitol Hill over his links to Irish special purpose vehicles that were used to hold chunks of Argentine sovereign debt following its default in 2001.

Lerrick, an economist and a renowned sceptic of global finance institutions such as the International Monetary Fund, was previously an adviser to the Argentine Bond Restructuring Agency (Abra), a collective of mostly European-based investors who held $1.2 billion of bonds.

As it negotiated with the then broke Argentine government, Abra held its bonds in a tax efficient Dublin SPV, which was set up for it by an Irish law firm using a children’s charity as a trustee. Linking sovereign junk bonds with a children’s charity has made some senators on the finance committee queasy.

This week, in his defence, Lerrick pointed out that structures similar to those used by Abra were also used by the US government-owned Export-Import bank to finance aircraft for decades. But eight months on from his nomination, he has yet to receive even a date for his Senate hearing.

His links to Dublin certainly haven’t given Lerrick the luck of the Irish.

– Guinness at €8 a pint? Dom Perignon P2 by the glass? Reservations to get into the bar? The opening today on St Stephen’s Green in Dublin of Alan Clancy’s 9 Below is further proof, if it were needed, that the consumer boom is well and truly back. Let’s hope this time, there is less of a hangover afterwards.

1,800 homes sign up as WiredScore rolls out build-to-rent certification 05:30
‘It is the environment that is really changing how we spend’ 05:20
Best career advisers know plans not built to last 04:59
Boyd Gaming casinos boosted by deal with Paddy Power owner 04:46
Ires hires contractor to build more than 60 apartments close to Croke Park 04:15
Search executive
jobs on irishtimes.com