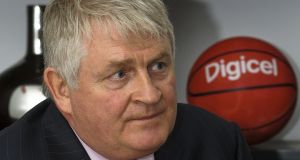 Denis O’Brien won’t let up in his long-running pursuit of internet giants, such as Google and Facebook, to force them to share a slice of their gargantuan advertising revenues with network builders such as his Caribbean telco Digicel. He argues they don’t pay their way, selling services down pipes and wires that others pay to build.

In a below-the-radar speech to global regulators in recent weeks he accused the web giants of peddling fake news, threatening the future of newspapers, and engaging in “flights of fancy” while poor countries struggle to finance the rollout of broadband. He even suggested they are indirectly sparking threats to democracy.

O’Brien has had the web giants – who are now the establishment, among the world’s largest corporations – in his sights for more than two years. They’ve tried to ignore him and brush him off, but he appears to be clinging on.

He has tried blocking their ads, although that mostly fell foul of Digicel’s regulators concerned about “net neutrality”. He has tried publicly berating Facebook founder Mark Zuckerberg for metaphorically “drinking our champagne and kissing our girls”, or earning profits over Digicel’s network without paying it fees. He has advised Google to “come to Jesus” and strike a deal, and he even directed a two-fingered salute at its head of international relations, Ross LaJeunesse, at a conference last year.

O’Brien is now threatening the web giants with a “New Deal”, echoing the language of post-depression US president Franklin D Roosevelt. But DOB hasn’t come over all FDR – benevolent and nice. St Denis is a district in Paris, not an Irish billionaire.

Instead, O’Brien is leveraging his position on the United Nations Broadband Commission to try and force the web companies to the table to pay up and help telcos fund the rollout of network infrastructure across Africa and poorer parts of Asia. The commission has also adopted the “new deal” language, seen as code for forcing the digital economy to pay its way in the world.

O’Brien tackled the web giants in recent weeks at the Global Symposium of Regulator s in Nassau in the Bahamas, not far from where his old nemesis, Tony O’Reilly, was declared bankrupt in 2015. The symposium included telco regulators and ministers from around the world. Senior executives from his counterparts, such as Facebook, were also present.

He told them that “the days of a few guys working out of a garage are long gone” and the digital economy is now “dominated” by a handful of corporations, name-checking the big two, as well as Amazon and Skype. He accused them of seeking exemption from regulations, while the likes of Digicel “obey the law and build the networks”.

In a line of argument that might make O’Brien’s critics at home chafe, he then criticised the web giants’ ability to avoid paying levels of tax commensurate with their economic power. He also went after them for destroying the business models of traditional media, such as newspapers, who struggle to compete with them for digital advertising. This, he said, is helping to endanger democracy. O’Brien is also the main shareholder in strife-hit Independent News and Media (INM).

“Politicians should realise that if the local media goes out of business – if they cannot afford to pay for real journalism, if all you have is fake news – then the net result is that democracy becomes seriously fragile,” said O’Brien.

How very true. O’Brien should also realise that showering the journalistic profession in his home country with legal threats, and suing the parliament, also does little to buttress the strength of a democracy. That’s an argument for another day.

O’Brien cited the UN’s drive for a “new deal” to fund telecommunications infrastructure in the sort of developing countries that have driven Digicel’s growth, and made him a billionaire.

“As part of any ‘new deal’, all network providers – whether they are telecoms operators or anyone else – need to be given a revenue share from advertising and OTT services [media and other services delivered over the internet] so they can fund broadband networks in the most rural parts of Africa, the CALA region [Caribbean and Latin America] and Southeast Asia,”

He then urged policymakers to “do the right thing”, which in the right circumstances could well be a maxim for anybody. O’Brien has his critics, at home and abroad. But on the thorny issue of internet companies growing fat at the unfair expense of others, who wither on the vine, it is hard to argue against him.

Silicon Valley cloaks itself in the language of inclusivity and progressiveness, which helps its denizens maintain a respectable place in the realm of public debate. But that sort of talk is cheap. It’s certainly a lot cheaper than paying your way.

Now that the web giants have grown so large and have so much clout – socially as well as economically – who is going to take them on?

While O’Brien has been keeping an eye on the web companies, it appears the shareholder advisory firm Glass Lewis has been watching events at INM, where O’Brien’s right-hand man Leslie Buckley is the chairman.

As is well known at this stage, Buckley is at war with INM’s chief executive, Robert Pitt. The next front in the battle will open up at next week’s annual general meeting. INM has been putting the meeting off for as long as it could. But, like a colonoscopy, there is no sense putting it off forever, no matter how unpleasant the scrutiny.

Glass Lewis this week published an account of the row – over how much INM should bid for O’Brien’s Newstalk radio station – that has engulfed the publisher since last year. The account ended by opining on the importance of regulators and management in overseeing events at INM, in the absence of enough independent board directors.

It also included a rather choice comment about O’Brien, who isn’t known as a big fan of choice comments. We asked him to respond, but his spokesman has yet to speak. The Glass Lewis post was signed by Paul Voelsch, which the firm says is one of their research analysts.

Meanwhile, roll on the AGM next week. Following the astonishing Indo row has been like a trip to corporate Funderland. Let’s hope nobody throws up at the end of it all.

IDA Ireland has been having some bother with its staff mobile phones, so it has tendered for a new operator to provide 194 new handsets and subscription packages for the next 18 months. It estimates that the contract spend over the period might be in the region of €170,000. The deadline is next Tuesday at noon.

They obviously like their kit at the IDA, as the tender specifies that each new handset must be a 32G iPhone 7. Those can retail at more than €700 each, although supplied by a mobile phone operator with an 18-month contract built in, the price would be much lower.

What the tender doesn’t specify, however – but probably should – is that Google, Facebook, Intel and all the other major foreign investors should be on speed dial.