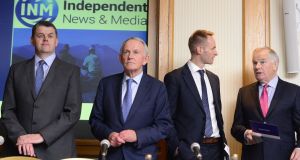 In corporate Ireland, the more things change, the more they stay the same. The ongoing civil war at Independent News & Media (INM) is about as much proof as you need.

Remember a decade ago, when Denis O’Brien was banging down the door of INM when it was under the control of his then nemesis, Tony O’Reilly? He used the issue of its supposedly lax corporate governance under O’Reilly as his battering ram.

A report paid for by O’Brien, then merely a “dissident shareholder”, said corporate governance at the company was “substandard”. It made a litany of criticisms, including questioning the independence of the board from its controlling shareholder. It also queried whether the board was acting in the interests of all shareholders.

When the O’Reilly-INM citadel finally fell in 2012, the portcullis rose and a triumphant O’Brien rode into town, replacing O’Reilly as the INM’s Dalai Lama. O’Brien insists these days that he doesn’t control the group, of course. But would he not agree that O’Reilly controlled it for 40 years with the same-sized 29 per cent stake that O’Brien owns now?

Whether or not O’Brien technically “controls” INM is moot. Everybody knows that little of strategic significance happens at INM unless he is on board.

Upon the regime change in 2012, Paul Connolly, one of O’Brien’s INM board representatives, promised the “highest standards of corporate governance” at the group. Well, now we can justifiably question whether or not those standards are being delivered.

As we all now know following reports from this newspaper, we currently have another INM-corporate governance scandal. But this time, O’Brien’s camp is on the receiving end of the battering ram, as well as quite a bit of schadenfreude from his enemies and critics.

For those of you who weren’t listening down the back, here’s a quick recap.

The extraordinary row involves the chief executive, Robert Pitt, and protected disclosures he and another executive made following Pitt’s row with O’Brien’s closest associate, the INM chairman Leslie Buckley. It was over how much INM should bid for O’Brien’s Newstalk radio station.

Pitt felt it was way overvalued, he and Buckley fell out (bigly, as the Donald might say), and Pitt complained to the board. A sub-committee of independent directors said there was nothing to see, so Pitt went to the State’s corporate watchdog, the ODCE (Office of the Director of Corporate Enforcement), which is investigating.

For some reason, the board then appointed an external independent review of the row, led by senior counsel David Barniville, and including a “corporate governance expert”. INM has never explained why the board felt compelled to establish this, but clearly Pitt rejected the earlier sub-committee’s findings. And he told them so.

The independent review group, The Irish Times understands, also includes Stephen Kingon, the former managing partner of PricewaterhouseCoopers in Northern Ireland. Given INM’s reticence to date on divulging the juicy details, will the report ever feel the full glare of publication? In the immortal words of George Bernard Shaw, not bloody likely. But INM might surprise us.

In the normal course of events, board-level responsibility at INM for reviewing compliance with corporate governance codes rests with its Nominations and Corporate Governance Committee.

You would expect such independent directors to have no material links to investors such as O’Brien, the most important INM shareholder and the man whose closest associate is the chairman. But links do exist in one case.

In 2013, Mullane founded MadMe, a mobile advertising company. Its shareholder register includes Jarrahdale, an Isle of Man company that appears to have invested about €250,000. You don’t forget a name like Jarrahdale in a hurry, and it is known that O’Brien is partial to using Manx companies.

We reported on these pages earlier this month how an Isle of Man entity called Jarrahdale had just invested €2.6 million into Plusvital, the equine science company owned by the O’Brien family. It appeared to be a circular transaction to pay off a loan due to O’Brien. It is the same Jarrahdale that has invested in Mullane’s company. We checked.

She may very well consider herself to be independent of INM’s largest shareholder. But if an O’Brien-linked company is financially backing Mullane’s latest venture, how is it that she meets the independent directorship criteria as overseen by the board? We will let you know if we get an answer.

The probe by the ODCE is perhaps the best bet for the public to uncover what has really happened at INM. It has wide-ranging powers to investigate companies, including appointing inspectors to probe a company’s affairs, if it believes this is in the public interest.

So far, no evidence of wrongdoing by anyone at INM, if any even exists, has emerged publically. INM says no findings of wrongdoing have been made against it or its officers, and it is co-operating with the ODCE.

But it will be interesting to see just how far the State’s corporate watchdog is prepared to go to get to the bottom of the complaints made INM’s top management about the aborted proposal to buy O’Brien’s radio station.

Last week, we advised Irish-based investors in the near-broke property fund, Brendan Investments, to keep an eye on an FBI probe into its former US business partner in the Detroit abandoned homes market, Metro Property Group.

Well, just 10 days ago, Sameer Beydoun, the founder of MPG and a co-investor with Brendan Investments in scores of houses listed by Detroit authorities, pleaded guilty to conspiracy to commit fraud.

Beydoun’s plea bargain includes a recommendation he serve between 33 and 41 months in prison. The maximum sentence without a plea is 30 years.

In his plea bargain, Beydoun admits that he took part in a conspiracy to defraud foreign investors. MPG would falsely advertise homes as “turn-key” with sitting tenants, making them ideal investments.

As soon as an investor bit, MPG would flip them the house for a multiple of what it paid weeks earlier. Soon afterwards, the investor would discover there was no sitting tenant, no income stream, and it was far from turn-key.

When allegations first emerged against MPG in 2013, Cork-based Brendan Investments told its Irish investors: “We have no reason to be concerned about the integrity of Metro, having worked with the company on a daily basis over the past 18 months in particular.”

That assessment looks a tad rash in hindsight. Brendan Investments dealt extensively with MPG and lost heavily as a result. Beydoun’s confession will be of little comfort to Irish investors who have lost out.

What happens in the GAA...

Members of the rugby fraternity are known for rising through the ranks in the financial and corporate sectors – old school tie and all that. But the GAA lads get their fair share of top roles too.

Former All-Ireland hurling winner Noel Sheehy, who was on the great Tipperary team with Nicky English that conquered all in 1989 and 1991, has just been appointed to oversee the whipping up of business in the SME sector for DLL Ireland, Rabobank’s leasing unit.

His Tipperary teammate English now works at Barclays Wealth Management, while Liam Sheedy, who arrived on the scene shortly after its All-Ireland wins, is a regional manager for Bank of Ireland.

Meanwhile, I wonder how important Aidan O’Mahony’s GAA connections were in getting public votes to win Dancing with the Stars last week.