INM in ‘hot and heavy’ talks with pension trustees 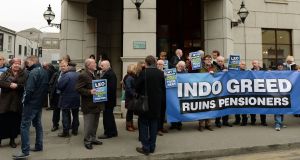 Independent News and Media executives and trustees of the group’s pension schemes have held “hot and heavy” talks over the company’s decision to stop funding the schemes.

It was the first time the sides have met since the company said it would no longer fund the two schemes.

Prior to the announcement, there had been no negotiations with trustees, leading to fears that 400 pensioners were facing cuts of between 30 and 80 per cent to pensions that were already cut by 40 per cent in 2013.

Yesterday’s meeting between the trustees and executives of INM was described as “no holds barred”, said a source close to the talks.

The encounter was “hot and heavy” and the executives were told “in no uncertain terms what the feeling of pensioners was”.

In a statement, the company confirmed negotiations had begun and said it was looking at “the basis for the allocation of contributions and the exact terms of the wind up of the defined benefit plans”.

“The details of the proposals or the content of the meetings are not being disclosed until matters are finalised by both parties and consultations are complete,” it said.

Trustees of the two defined benefit schemes, whose members are almost all deferred pensioner former employees of INM, have asked the company to contribute €12 million into replacement defined contribution schemes. This is about half the expected once-off windfall benefit to INM’s balance sheet following the closing of the two schemes.

The trustees are insisting a large percentage of the €12 million go towards easing the burden to be suffered by pensioners. *

INM has about €60 million cash in hand and is expected to have over €84 million by the end of the year.

A financial restructuring agreed by shareholders last week has to be approved by the High Court and is linked to the company’s pension decision.

As a result of the restructuring, shareholders – who include Denis O’Brien, who owns 29 per cent of INM, and Dermot Desmond who has a 15 per cent stake – stand to gain substantially, something that has incensed pensioners.

1 Election adds to headaches for AIB boss Colin Hunt
2 Seán FitzPatrick’s new Greystones’ home plan runs into privacy issues
3 Ad agency Chemistry closes after 20 years
4 Irish people like nothing more than being bribed with their own money
5 Fast-growing frozen food group has a strong appetite for success
6 Hogan warns Britain on US trade deal as EU set to impose tariffs
7 Greencore investors urged to spurn Coveney’s €315,000 pension
8 The Irish economy is thriving but if you’re not feeling it – here’s why
9 Volkswagen chief warns ‘sacred cows’ need slaughtering
10 GoMo is being investigated by advertising authority
Real news has value SUBSCRIBE