Excerpts of texts in court documents reveal conversations with board members 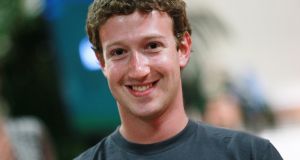 Facebook founder Mark Zuckerberg may intend to pursue government service while retaining control of the company, according to recently unsealed court filings in a case pitting the chief executive against minority investors. The class-action lawsuit was first filed in late April, after Mr Zuckerberg proposed a corporate shake-up that would dilute the voting power of shareholders giving him “eternal control” of the company, in the words of the shareholders’ lawyers.

Excerpts of text messages in the court documents reveal that Mr Zuckerberg and two board members discussed Mr Zuckerberg’s possible government service and argued about how to present it to shareholders.

Venture capitalist Marc Andreessen, one of the company’s most prominent investors, texted Mr Zuckerberg in March to say that the “biggest issue” of the corporate proposal was “how to define the gov’t service thing without freaking out shareholders that you are losing commitment”.

A few weeks later, as Mr Andreessen spoke with two other members of a special committee, the investor continued texting with Mr Zuckerberg about negotiations. “I think the biggest remaining issue is still around the government service,” he wrote. Mr Andreessen added that another of the committee members, former White House chief of staff Erskine Bowles, was “massively uncomfortable” with Mr Zuckerberg “going off on leave with no involvement by the board and retaining control”.

“He’s worried that it’s the straw that breaks the camel’s back on the optics of good governance,” Mr Andreessen went on about Mr Erskine. “He’s worried it’s the thing people will point to on announcement and say ‘what the f**k are you guys doing agreeing to this’, particularly since he thinks gov’t service would require you to give up control of FB anyway and it’s a moot point.

“My counter argument is that because it’s likely a moot point let’s just give on it and it will probably never matter.”

In mid-April, the special committee recommended that Facebook’s board approve the new system and, according to the court documents, Mr Andreessen texted Mr Zuckerberg: “The cat’s in the bag and the bag’s in the river.”

Mr Zuckerberg replied: “does that mean the cat’s dead?”

Mr Andreessen answered: “mission accomplished”, adding a smiley face. The board approved the plan, as did shareholders, with Mr Zuckerberg the controlling voter among them.

According to the proposal as it was described in a regulatory filing, Mr Zuckerberg would be able to take a two-year leave from Facebook to serve “in a government position or office” without losing control of the company.

Minority Facebook investors sued Mr Zuckerberg in late April and early May, alleging in in Delaware’s chancery court that he and Mr Andreessen unfairly meddled in the board’s decision and protected Mr Zuckerberg over minority shareholders. The plan to restructure Facebook’s stock system was paused by the court until the lawsuit’s resolution.

Attorneys for the plaintiffs declined to comment. A spokesperson for Facebook said: “Facebook is confident that the special committee engaged in a thorough and fair process to negotiate a proposal in the best interests of Facebook and its shareholders.”

Mr Zuckerberg has fastidiously tried to avoid the appearance of political bias, even as his company has sunk deeper into political controversies, for instance in board member Peter Thiel’s support for Donald Trump and Facebook’s emergence as a platform for misinformation and fake news.

Earlier this year, Facebook fired the human team that moderated its “trending news” section over accusations of bias, and Mr Zuckerberg called it a “crazy idea” that misleading and false articles could sway voters. He later promised: “We take misinformation seriously”.

The chief executive has also met Republicans, Democrats and officials in the Obama administration, in part to talk about government surveillance. He has also increasingly turned his attention to philanthropy, saying that he hopes to “cure, prevent and manage all disease by the end of this century”.

Mr Andreessen first invested in Facebook not long after the company’s founding, although Mr Zuckerberg rebuked the board member earlier this year for saying India had suffered from “anti-colonialism”. – (Guardian)