If only pay-TV platforms were less infuriating

Amid a glut of content, why are Irish viewers frustrated and short-changed? 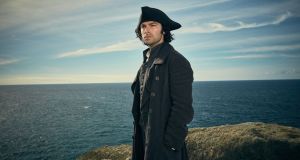 Poldark (Aidan Turner) searches far and wide for a pay-TV provider that will give him everything he needs. Photograph: Mammoth Screen/BBC.

In idle moments, I like to think about the perfect television platform.

This platform would be a single, one-bill service that includes everything I am ever likely to watch, with no missing channels, no screen blackouts and, ideally, a bare minimum of prohibitive extra charges for stuff labelled “premium”.

Every channel would be available on-demand and on-the-go through apps that don’t freeze. If the app does have to be restarted, it won’t torture me by repeating the same long bank of advertisements before I can reach the opening credits – only to crash again.

If pay-TV platforms borrow huge sums to pay an inflated price for content, they would not be permitted to lock up that content on exclusive channels that they keep from rivals – encouraging widespread piracy – nor would those rivals be allowed to point-blank refuse to carry or periodically withdraw particular content.

In my perfect TV world, competition and/or media regulators would oblige rights-holders to make wholesale offers to other platforms on commercial terms and step in if this can’t be done. Subscribers to rival platforms would either have the option of paying an add-on fee or having the channels wrapped into the overall price of their service.

All conceivable on-demand services would be available through every self-respecting platform and the phenomenon of the suddenly disappearing box set would be deemed cruel enough to trigger a refund.

Oh, and there would always be a clear route through the maze of territory-by-territory content rights that is, to be fair, often beyond the control of individual broadcasters.

In the immortal words of Avril Lavigne, why does it have to be so complicated?

If I ruled the TV world

The BBC iPlayer: In the UK, the iPlayer is fast becoming the flagship “portal” to BBC content, including all that stuff that used to be on BBC Three. Wouldn’t it be nice if it was available to Irish viewers through their TV platforms or smart TVs? At the moment, it seems the BBC’s stance is “no deal”. Its channels are not even available on Virgin’s “Replay TV” facility, which is all rather bad news if the DVR fails to record Poldark.

In Ireland, the only way to watch the BBC on-demand is to wait for its programmes to show up in unpredictable fashion on Irish channels or Netflix – aka that hard-to-exit repository of television that at least has the grace to be readily and widely available at a price consumers can take or leave.

ITV: I hate to bang on about this, but many of the jewels of the ITV network – a reasonable version of which was available for decades in the Republic as UTV – are these days either delayed en route to Irish screens or permanently lost. Some gratitude is admittedly due to the ITV programming rights-holder, Virgin-owned TV3 Group, for preventing any foolish hate-watching of Piers Morgan over breakfast. But after decades of having the same access to UK television culture as people who live in the UK, it feels strange that this synchronicity is now gone.

Sky Atlantic: In 2011, when Sky launched Sky Atlantic, its home for the drama and comedy rights it thoughtfully hoovered up from US networks such as HBO, Showtime and AMC, it kept the channel to itself and didn’t offer it to other pay-TV platforms. It seems most unlikely to change its mind now. Non-subscribers have recently gained the ability to officially access this content, plus some stuff Sky makes itself, through Now TV. But, like sports fans before us, we will pay handsomely for that pleasure. And we’re already paying for Netflix.

Eir Sport: The failure of Virgin Media and Eir Sport to agree a wholesale price for the Eir pack of channels, which includes BT Sport, exemplifies the many and various frustrations Irish consumers feel when they do business with telecoms companies. One year after the dispute, a resolution seems a long way off. If only there was some regulator that might help sort it out.

In the immortal words of Avril Lavigne, why does it have to be so complicated? How is it even possible to live amid a total glut of broadcasting content and still feel both short-changed and ripped off?

Perhaps it is the inevitable side-effect of a frenzied and fast-mutating global media market, where big players in the US and Britain call the shots. Perhaps some pay-TV providers are too caught up in the all-important broadband race to pay attention to the finer details. Either way, Irish pay-TV customers have been no strangers to price rises in recent years and deserve less infuriating treatment.