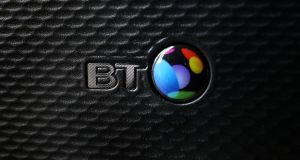 Profits at BT took a hit after the telecoms giant took a £225 million charge linked to its Italian accounting scandal. Photograph: PA

BT posted a 42 per cent drop in first-quarter profit after it took a fresh charge from an Italian accounting scandal to avoid legal claims from two of its major investors in the latest setback to the British telecoms provider.

BT stunned shareholders in January when it revealed a £530 million (€592 million) black hole in its Italian accounts and a slowdown in UK government work, wiping £8 billion (€9 billion) off the company’s value on the day.

On Friday BT said it had taken a £225 million charge to settle warranty claims from Deutsche Telekom and Orange which became shareholders as part of the sale of their mobile joint venture EE to BT in 2016.

The payout resulted in first-quarter pre-tax profit falling by 42 per cent, and sent BT shares down 4 per cent in early trading to 302 pence, just above the 298 pence they fell to on the day of the January profit warning.

“In common with any acquisition there were warranties put in place and the settlement today is to address that,” chief executive Gavin Patterson told reporters.

“We’re disappointed, this had only very recently come up.”

BT said this had come despite a slow broadband market. As part of its drive to simplify the business, it said it would merge the EE and consumer division to promote the sale of multiple products together.

Marc Allera, the head of EE, will lead the combined business.

The group has also started to restructure its global services division, which was behind both the Italian problem and the UK slowdown, by cutting 4,000 jobs. “Just when we thought Italy was well behind us,” Bernstein analysts said in a note.

BT reiterated its full-year outlook. For 2017/18, it has forecast that underlying revenue will be broadly flat and core earnings will fall to £7.5 billion.

“It’s probably unfair to paint an entirely gloomy picture,” said George Salmon, equity analyst at Hargreaves Lansdown. “Nonetheless, with BT fighting battles on several fronts, one could be forgiven for waiting for the dust to settle.”