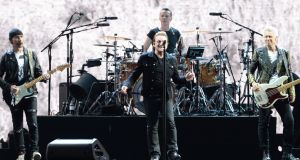 U2 back on stage at Croke Park, thirty years after they performed “The Joshua Tree” in Dublin. The band is one of a number represented by Universal Music. Photograph: Eric Luke

Revenues from the sale of CDs more than halved at Universal Music Ireland 2016 hitting profits at the group.

Accounts just filed with Companies Office by the Irish subsidiary of the global record label show that the sale of CDs – which made up about 47 per cent of revenue in 2015 – dropped by some 50.8 per cent to €3.05 million.

Royalties and licence fees, meanwhile, increased by 17 per cent to €7.88 million.

The company, which markets and sells recorded music, said that the significant revenue drop of 17 per cent to €10.9 million was due to a major customer ceasing to trade in the Republic. That refers presumably to the demise of HMV’s Irish business.

However, the company suggests it maintained its leading market share in the Irish music market in 2016.

Universal Music Ireland, which represents artists including U2, Ariana Grande, Gwen Stefani, James Bay and Lionel Richie, also reported a pre-tax loss for the year. The loss of €642,304 compared to a profit of €1.6 million the previous year. However, it paid a dividend of €1.2 million in the period.

Employing an average of 18 staff throughout 2016 the company paid out €1.25 million in wages and salaries. The two directors of the music label, Mark Crossingham and Nick Younger, received remuneration of €459,913 in the period, down by €50,000 on the previous year.

Despite some positivity in the company’s report, it still sees external risks from the ongoing recovery in the aftermath of the economic recession “and its impact on the Irish music market.”

1 ‘No demand... because there are no people’ at well-known Dublin pub
2 HSE says fix for Covid Tracker app rolled out to all Android users
3 UK criticised for ‘unforced errors’ on post-Brexit trade deals
4 Nearly 30,000 could lose pandemic payment if they do not confirm eligibility
5 Oura ring: Wearable device that tracks activity and vital statistics
6 Face masks developed in Ireland could help meat-plant workers
7 MSD buys Takeda biologics plant in Dunboyne
8 Bank of Ireland does U-turn after refusal to reimburse ‘smishing’ victims
9 Unilever would scrap HQ move if Dutch ‘exit tax’ law enacted
10 What will the office market look like after the great remote working experiment?
Real news has value SUBSCRIBE