Sky ‘VIPs’ can watch shows 24 hours before other subscribers 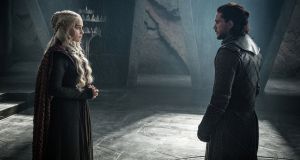 People who have subscribed to Sky’s pay-television service for three years or more will now be able to watch Sky Atlantic dramas 24 hours before newer customers.

Thousands of Sky’s Irish customers have been participating in a “soft launch” of Sky VIP, a “tenure-based” loyalty programme devised by the European pay-TV and telecoms company to help it retain customers.

The lowest tier of benefits, for customers on Sky’s books for less than three years, includes ticket offers and a voucher for Sky’s Buy & Keep movie store.

On the next tier, people who have subscribed to Sky continuously for three to eight years will also be permitted to view certain Sky Atlantic dramas 24 hours before other customers on a channel called Sky Atlantic VIP.

The access will not apply to dramas such as Game of Thrones that are simulcast on Sky with their transmission in the US or ones already made available to viewers within 24 hours of their US broadcast.

The Sky Go Extra service, which allows users to download streamed content onto tablet and mobile devices and watch them offline, will now be free for customers if they have subscribed to Sky for three years or more. It usually costs €6 per month.

The next tier applies to subscribers of between eight and 15 years, who will also have access to special offers from Sky Q, the company’s latest television platform, from September.

The set-up fees for Sky Q will be waived for subscribers on the books for more than 15 years, who will be given “priority customer service”, Sky said. These customers will also not face extra charges to set up the Sky service if they move house.

“We have spent a lot of time talking to customers and learning about what is important to them,” said Ann-Marie MacKay, director of products and marketing for Sky Ireland.

1 Declan Ganley denies Donald Trump trying to swing lucrative 5G contract for Rivada
2 How long can Government afford to keep State pension age at 66?
3 Brexit: UK and EU agree to intensify talks in rush for deal
4 Marquees and fleets of delivery vans: how supermarkets are ready for Lockdown 2
5 Vendors adopting ‘wait-and-see’ approach in sub-€20m market
6 Irish start-up Wayflyer raises €7.8m in seed funding
7 Fair deal? Family at odds with hospital and each other not so sure
8 Ronan gets go-ahead for apartments in docklands
9 Coronavirus: forgotten lessons of the Spanish flu pandemic
10 Irish house prices could buck European trend and fall this year, says S&P
Real news has value SUBSCRIBE