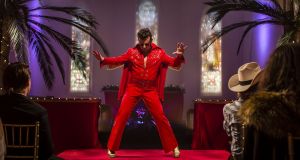 Virgin Media Ireland will woo students and other contract-averse customers with a new slimline television service called Freedom TV that requires only 30 days’ notice to cancel.

The move by the Liberty Global-owned company is the latest sign that pay-TV companies in Ireland are being forced to rethink their approach to recruiting younger customers.

From Tuesday it will be marketed with a “creatively risky” television advertisement set in a Las Vegas wedding chapel.

“This is our way of understanding this part of the market. Apps and streaming are at the heart of it,” said Virgin Media Ireland’s vice-president of commercial Paul Farrell.

Streaming volumes on Virgin TV Anywhere have been rising at a rate of 8 per cent a month this year, Mr Farrell said, but some 95 per cent of app usage relates to people streaming on devices within the home, rather than out and about.

This suggests that a younger generation of viewers does not necessarily need a traditional television screen to watch content. Nor are they only watching linear television: the spot held by Netflix, which is integrated into Virgin’s electronic programme guide, is “one of our top five channels”, Mr Farrell said.

Virgin’s regular broadband and television services are subject to an initial 12-month contract.

Its move follows the April arrival on the Irish market of Sky’s Now TV, a “no strings” over-the-top streaming service that charges fees for monthly “passes” to entertainment, movies and sport.

Sky, which is 39 per cent owned by Rupert Murdoch’s News Corp and the subject of a bid for full ownership, said its research had found that a contract “can be a barrier for people”.

Younger people who don’t own a television set are one of the key targets for Now TV.

In the US market, “cord-cutting” has been a marked feature for several years, with consumers dropping cable services and often replacing them with a combination of streaming devices such as the Roku player and cheaper subscription services such as Netflix, Hulu and Amazon Prime.

This was “really aimed at students”, Mr Farrell said, with users tending to cut their service at the end of term when they went home to their parents’ households or travelled abroad for the summer.

At the moment, the 20-channel pack is the only one available under the Freedom TV model, but Virgin hasn’t ruled out extending its flexibility to its bigger channel packs.

Subscribers may have to wait some time before they regain access to Eir Sport through the Virgin platform, however. The service has not been available to Virgin customers since last summer when the two companies fell out over the wholesale price Eir sought to charge Virgin.

Glen Killane, the managing director of Eir Sport and Eir TV, recently told The Irish Times he would “love to re-engage in conversation with Virgin” but that “it has to be fair deal”.

But Virgin said it was unwilling to ask its customers to subsidise an Eir business model in which Eir gives Eir Sport free to its broadband users.

“We’re more than happy to meet Glen at any stage, but the reality is we’re never going to subsidise Eir’s business,” Mr Farrell said.

Virgin Media Ireland, previously known as UPC Ireland, saw its television customer base drop below 300,000 in the first quarter of 2017, continuing a pattern of decline in recent years.

Liberty Global publishes its second-quarter earnings after the close of US markets on Monday.