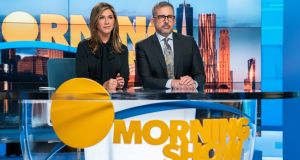 Jennifer Aniston and Steve Carell in a scene from The Morning Show on the Apple TV Plus streaming service. Photograph: Hilary B. Gayle/Apple TV Plus via AP

The show the press was scolding was Succession – the HBO hit that was once critically derided but is now among the most acclaimed television series of recent years.

Apple executives will be hoping that its new video streaming service Apple TV+ will follow a similar trajectory after garnering decidedly mixed reviews for its original line-up.

Launching on Friday, the iPhone maker is looking to take on Amazon, Netflix and upcoming entrants such as Disney+ and HBO Max with a slate of expensive and star-studded new series. The most prominent is The Morning Show, one of the most costly TV series ever made, a #MeToo-era drama featuring Jennifer Aniston, Reese Witherspoon and Steve Carell as hosts of a popular TV talk show.

Apple’s move into video streaming is part of a wider push to capitalise on its access to hundreds of millions of iPhone users, propping up its revenues even as smartphone sales decline. The strategy is working: on Wednesday Apple said iPhone sales fell by 9 per cent in the last quarter, but overall revenue rose, with its Services division accelerating 18 per cent to $12.5 billion (€11.2 billion).

With Apple TV+, the company will aggressively undercut its rivals with a $4.99 monthly price – something chief executive Tim Cook described to investors this week as “a gift to our users”.

In Ireland, the price will be €4.99 after a seven-day free trial.

But with negative reviews calling into question Apple’s ability to lure subscribers, the service is already on the back foot. “All the pretty people in the world can’t keep you hooked when the purpose is this muddled,” said Indiewire of The Morning Show, rating it a C-.

Long accustomed to selling premium products at uncompromising prices, Apple’s TV venture has cast it in a very different role: the maverick newcomer hoping to break through a crowded market with a bargain.

After years of denying the rise of internet television, traditional media groups are now fighting back against Netflix and other tech groups that have upended their business. The largest media companies in the world – Disney, AT&T’s WarnerMedia and Comcast’s NBCUniversal – are all in the midst of launching their own rival streaming services to do battle with Netflix.

The result is a deeply competitive landscape characterised by fierce bidding wars, soaring content prices and huge volumes of content.

Amid the bevy of offerings, Apple, which has never before ventured into scripted series, has been a big question mark in Hollywood – even among the producers making shows for its service.

One Hollywood executive who has been working with the company said that he struggled to understand what Apple hoped to accomplish with TV+, and which audiences it was targeting. “I don’t know who the Apple offering is first and foremost designed for,” he said.

Meanwhile, a Hollywood financier who has sold several shows to Apple said: “From what I’ve seen, The Morning Show is not going to sustain huge growth on a subscription service. They’re really far behind [Netflix and others].”

However, he pointed out Apple’s financial advantage: despite how much it paid for The Morning Show – about $250m (€224m) for two seasons, according to several people familiar with the matter –  means“they could throw it in the garbage and it would be a footnote in their financial statements”.

Apple’s earnings in the past 12 months amounted to $260 billion, but Wall Street is still closely watching the TV+ strategy. Shares in the company fell almost 3 per cent a few weeks ago after a Goldman Sachs analyst voiced concerns that free trials would dent margins.

Critics have also argued that Apple’s TV strategy has at times appeared directionless. In addition to The Morning Show, its first series include a dystopian fantasy, a 19th-century coming-of-age story and an alternative history space race.

But according to people familiar with the matter, the company said no to more than 1,200 projects before greenlighting the first four to six scripts, while it has enlisted seasoned executives to steer its programming, including Jamie Erlicht and Zack Van Amburg, Sony Pictures veterans who played instrumental roles on hit shows such as Breaking Bad and The Crown.

And Apple’s sheer scale should make it difficult to count out. Its $4.99-a-month price compares favourably with $13 for Netflix’s most popular plan and $15 a month for HBO Max – and it’s free for a year for anyone who buys an Apple device. If even a fraction of the 200 million people who buy iPhones each year take up its offer, TV+ would become one of the biggest players in television.

One of the biggest problems for Apple is that the market could be headed for saturation. In recent weeks the streaming wars have reached a fever pitch, as WarnerMedia on Tuesday unveiled to investors its big streaming bet HBO Max, while Disney+ has been on a marketing blitz ahead of the debut of Disney+ in November.

With an unprecedented amount of content to stream, it is not clear whether consumers will shuffle between services or sign up to multiple at once. Analysts believe that most viewers will sign up for between three and five video streaming services in total. Netflix, which already has more than 150 million subscribers, is unlikely to lose its perch.

Wall Street is confident in Disney’s product, which will launch on November 12th with a vast library including popular franchises such as Star Wars and Marvel. But the jury is still out on WarnerMedia’s HBO Max, which is charging more than rivals but has an unparalleled catalogue including Harry Potter, Friends and Game of Thrones.

Apple’s chief disadvantage is its thin library. While Disney, Warner and NBCUniversal have thousands of beloved films and shows to offer, Apple is entering the marketing with a handful of series which received a lukewarm reception.

It may be that this foray into TV is more experimental than reflecting a settled strategy. One senior industry figure described it as a way for Apple to “get its feet wet” and understand the business before making a bigger decision, potentially including an acquisition.

Meanwhile, Apple finance head Luca Maestri said streaming was part of a long-term play, and not designed for a quick payout. Referring to TV+ and Apple’s Arcade gaming service, he said: “We feel very optimistic about how these businesses will return over time.” – Copyright The Financial Times Limited 2019

Apple TV+ has gone live in Ireland at €4.99 a month following a seven-day free trial. It will be competing with three players for Irish video streaming subscribers. Here’s how they compare.

Netflix, which has close to 160 million subscribers globally, came to Ireland in January 2012. On the back of original shows such as House of Cards, Orange is the New Black and Stranger Things, the online streaming platform has built up a loyal audience locally. While it doesn’t publish subscribers numbers on a country-by-country basis, a ComReg survey last year estimated that Netflix was being used in more than 500,000 Irish homes.

Netflix hiked prices recently although its basic entry subscription plan remained unchanged at €7.99. The standard plan, which allows users to view content on two screens at the same time, rose by €1 to €11.99, while the premium plan, which lets subscribers stream TV shows and movies on four devices simultaneously, increased by €2 to €15.99. A free 30-day trial is available for new users.

Amazon’s Prime video service has been available locally since December 2016. While it has an attractive introductory price of €2.99, a limited number of films and programmes initially meant it has taken a while for the platform to gain an audience. Original hits such as The Marvelous Mrs Maisel and Good Omens, as well as rights to live tennis, have helped boost subscriber numbers.

Prime costs €2.99 per month for the first six months, and €5.99 per month after that. Subscribers enjoy certain benefits when ordering goods online with Amazon.

Sky’s streaming service launched here in April 2017 and has become increasingly popular due in part to must-watch programmes such as Chernobyl, Succession and Game of Thrones. It offers a large catalogue of movies, entertainment, kids TV and sports, which are available via a number of monthly ‘passes’. Costs range from €7 for the children’s television service through to €39 for its sports extra pass. A variety of discounts and free trials are available depending on the package.

Aimed at those who do not already subscribe to Sky, the service is available via smart TV apps and through its ‘Smart Stick’ which plugs in the back of a compatible television. – Charlie Taylor