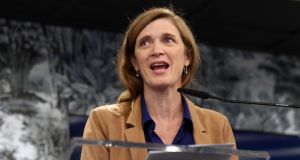 Riverdance co-founder John McColgan will chair the Irish committee of the Global Goal Live campaign that aims to raise $350 million (€318 million) in a year-long initiative to help the United Nations tackle poverty in the poorest 59 countries.

The campaign will culminate with a Live Aid-style concert at multiple venues around the world to raise funds to help tackle poverty and climate change. The initiative is being led by Teneo, the global strategy and communications group, co-founded by Irishman Declan Kelly, in partnership with not-for-profit group Global Citizen.

Mr McColgan will be responsible for working with “business, government and local performing artists to generate support for the campaign”, according to Global Goal Live, which had its Irish launch on Friday.

The sum they will seek to raise here has not been disclosed.

The global campaign will culminate on September 26th, 2020, with a 10-hour event spanning five continents. Concerts are planned for Central Park in New York, and Lagos, Nigeria, with cities in Latin America, Europe, and Asia yet to be announced.

“I am incredibly proud to be joining this important endeavour along with my long-time friend Declan Kelly and Hugh Evans of Global Citizen,” Mr McColgan said. “Ireland has a long history of leadership around the Global Goals and I am confident Irish businesses, individuals, artists and government will come together to ensure Ireland does its part to support Global Goal Live.”

“We have are delighted to have John McColgan on board as chairman of the Irish committee that will work with us on this global campaign to secure the $350 billion in commitments that are needed this year. ”

These new funding commitments will fall into the areas of human capital, gender equality, and sustainability.

Mr Kelly later said Bob Geldof, the driving force behind the Live Aid famine releif campaign in 1985, will also be involved. He said that he had spoken this week with Taoiseach Leo Varadkar and President Michael D Higgins, both of whom had expressed support for the project.

There will be an event in Dublin as part of Global Goal Live, Mr Kelly said.

Mr Kelly is due to appear on the Late Late Show tonight to promote the initiative.